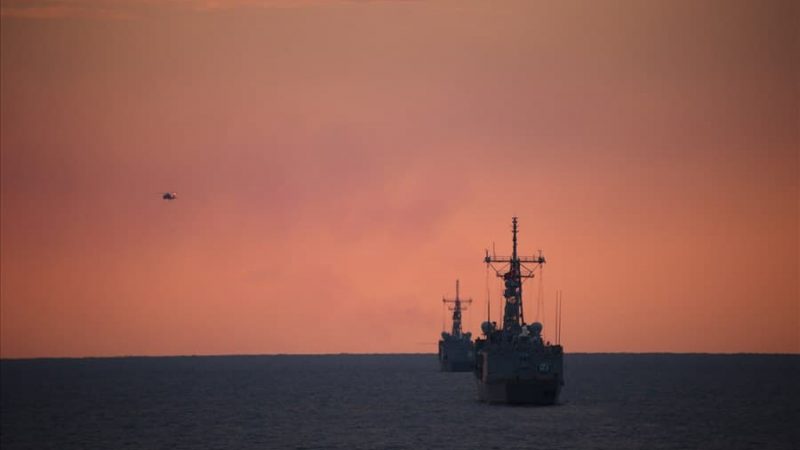 The “Blue Homeland – 2021” naval exercise has started today. Ret. Admiral Cihat Yaycı has evaluated the exercise. Yaycı said, “it is difficult to claim rights where you are not present. These exercises enable intense activity in the open seas.”

The Turkish Navy has started today the “Blue Homeland – 2021” naval exercise, which will take place between the 25th of February and 7th of March in the Aegean Sea and the Mediterranean. A total of 87 warships have set sails towards their exercise destination. Several army and air force units will also join the Turkish navy during the exercise.

The Turkish Ministry of Defense declared that the exercise will test the readiness of units, warships and command posts connected to the Turkish Naval Forces.

The exercise aims to improve basic operational actions, naval operations and interoperability on task force level. Interoperability and mutual support with army and air force commands will be tested and the component’s level of preparedness to war will be raised.

On the naval exercise will take part: from the Turkish Naval Forces 82 warships, 5 marine patrol planes, 12 sea helicopters and amphibious marine infantry and Special Forces Units of Underwater Offense; from the Land Forces Command helicopters; from the Air Force Command F-16, F-4 and air surveillance planes; from the Gendarmerie search and rescue units and from the Coast Guard Command S/G boats. In total, 87 ships, 27 planes and 20 helicopters will participate in the drills.

UAVs will be used in the exercise on operational and tactical level, and to provide realistic conditions, water surface and air-to-air missiles will target high speed UAVs.

Ret. Admiral Cihat Yaycı, who had developed this exercise during his duty in the Turkish Naval Forces, has evaluated the “Blue Homeland – 2021” drills. He stated the following:

“The Blue Homeland Naval Exercise, started in 2019, is one of the most important components of developing the Blue Homeland Doctrine. The drill is planned to take place in three seas simultaneously. This exercise mobilizes all units of the Naval Forces including the most remote elements, and trains interoperability with other parts of the Armed Forces. That means, it is both a naval drill as well as a joint drill with Land and Air Forces, therefore an exercise of striking dimension.”

Even most remote elements mobilized

The Admiral continued to provide a background of naval exercises:

“The Naval Forces execute exercises every year starting from basic to most sophisticated drills. Therefore, the current drill takes also place within a planned schedule. This exercise does not target or threaten anybody, but it is a very important display of the will and readiness of the Turkish Naval Forces to defend the homeland on the seas. The drill displays military capacity and war training levels that provide confidence to allies and fear to enemies. On these exercises, certain scenarios are played out, which every year are newly designed according to the actual political-military circumstances. Very importantly, the current drill includes UAVs and Unmanned Marine Vehicles, displaying their integration into our Naval Forces and thus the modernity of the latter.”

An exercise of exemplary character

“In this exercise, the Turkish Naval Forces’ access to und use of all international waters in the Aegean Sea (“the Sea of Islands”) and the Mediterranean is enforced, and the principle of maritime freedom is practically realized. Today, Greece claims sole property on the Sea of Islands and harass a Turkish maritime research vehicle, the TCG Çeşme. Turkey’s current exercise is a response. This exercise transmits the message that these are international waters that belong to everyone, and therefore, everyone can pursue drills here. It is difficult to claim rights on spaces where you are not present. These exercises also enable sophisticated and intense activities in international waters. They provide the Naval Forces great opportunities of observance, intelligence gathering, test of weapons systems and ammunition. The current exercise is studies as a leading example both within the NATO and worldwide. It is very difficult and complicated to deploy that amount of warships simultaneously. This is almost impossible. But the Turkish Naval Forces are one of the best-organized and most successful navies of the world, and it displays its qualities with the current drill. The drill is very important to show that the navy is prepared to war, how well it is prepared to war and which strong force of deterrence it commands. The drill at the same time displays the Turkish Naval Forces’ strong technological infrastructure, because you need such an infrastructure in order to activate all these war ships and military units at the same time. These exercises are a proof of the Turkish Naval Forces’ contribution to peace, stability and security. They are not an element of threat.”