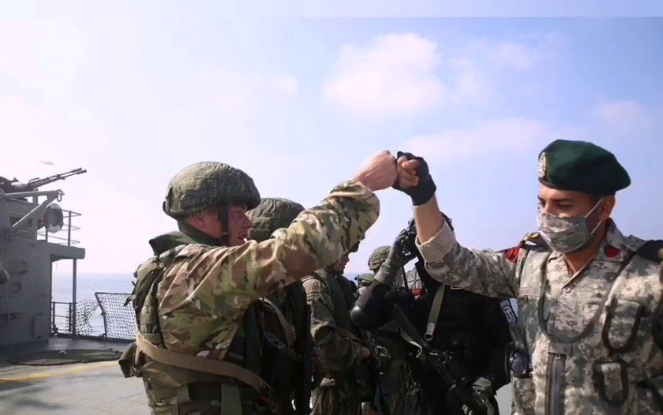 NATO members currently discuss on their summit the NATO 2030 Strategy, which is supposed to answer “strategic rivalry” with Russia and China.

Asian giants on the other side of the planet meanwhile have started an important military exercise, which might be considered an answer. The Iranian and Russian militaries have kicked off a joint naval drill in the Indian Ocean aimed at boosting security of maritime trade in the region.

Speaking to the news agency IRNA, Iran’s Navy Commander, Rear Admiral Hossein Khanzadi said, “The main purpose of drill is to achieve collective security at the regional level, which will help the North Pacific security of the Indian Ocean to continue in favor of all stakeholders”.

“When the powerful Russian navy conducts exercises with the navies of the Islamic Republic Army and the Islamic Revolution Guards Corps, it sends a clear message.”

As in the past exercise December 2019; China will also join the drill following the Chinese New Year festivities.

Additionally to Russia, Iran and China; India will participate the first time in these naval drills. India’s participation would signal a setback for US Indo-Pacific plans, which counted on the country as a counterbalance against China.

Facing the military drills, US CENTCOM Commander, Marine Corps Gen. Kenneth F. McKenzie, has declared in a key note speech held 9th of February that “The United States faces increasing competition in the region from Russia and China both vying for power and influence through a combination of diplomatic, military and economic means”.