Turkish counter-terror military operation in southeast Turkey and northern Iraq; Two-state solution for Cyprus; the lockdown and vaccination efforts against the pandemic 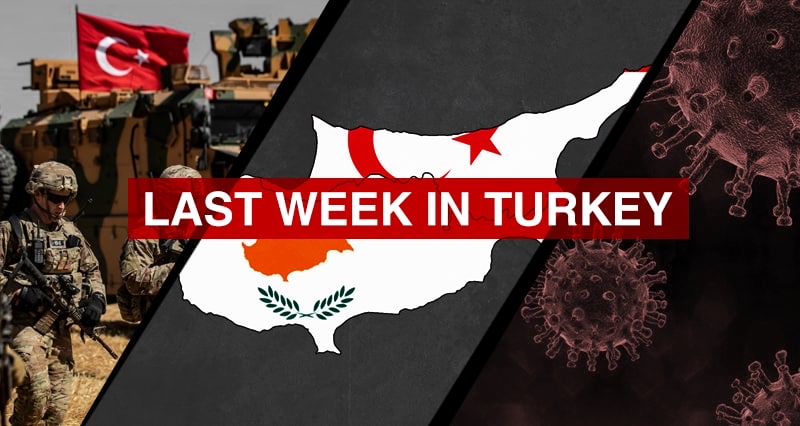 The first was the second phase of the counter-terror Operation Claw-Eagle by the Turkish Armed Forces and the execution of 13 civilians by the PKK terrorist organization.

The second topic was the ongoing negotiations and arguments about a resolution, whether the island of Cyprus should be governed by two states or not.

The third topic was the lockdowns and vaccination efforts against the pandemic, a fight that has entered its 11th month led by the Ministry of Health and other government officials.

Turkey carried out a pre-emptive strike against elements of the PKK terror group in northern Iraq as part of the second phase of the Operation Claw-Eagle, the Turkish Defense Ministry said on Wednesday.

A ministry statement said the terror elements were targeted in the Gara region to prevent their efforts of reestablishing positions, which they used to carry out terror attacks against Turkey.

The second phase of the Operation Claw-Eagle is in line with the right of self-defense arising from international law, to neutralize the PKK/KCK and other terrorist elements, the ministry added.

Three Turkish soldiers were martyred and three others were wounded in the anti-terror operation in northern Iraq, Turkey’s National Defense Ministry said Thursday.

In a statement, the ministry said a soldier succumbed to his injuries after he was wounded in a clash with terrorists in a pre-emptive strike against elements of the PKK terror group in the Gara region during the second phase of Operation Claw-Eagle.

The ministry showed grief upon the martyred soldier and extended its condolences to his family and the nation.

Forty-eight PKK terrorists were neutralized, including two senior members, in northern Iraq during Turkey’s anti-terror operation that has been completed, the Turkish defense chief said Sunday.

Hulusi Akar said two terrorists were captured and the region mostly cleared of the terror group during the “extremely special and critical” operation in the Gara region.

“The operation has been completed. Our land and air elements returned to their bases and barracks safely,” he said at the operations center on the border in southeastern Sirnak province.

During the campaign, more than 50 terror targets, including ammunition depots, caves, and bases in Gara were destroyed, he said.

Turkish security forces seized ammunition, equipment and organizational documents in another counter-terrorism operation this time in the eastern Sirnak province of Turkey, the governor’s office said on Saturday.

According to a statement, a joint team of gendarmerie commandos and police held the operation in the vicinity of Mt. Gabar and targeted over a dozen shelters and caves in which weapons and equipment were buried underground.

Bodies of 13 Turkish citizens were found during Turkey’s anti-terror operation in northern Iraq, according to the Turkish defense chief on Sunday.

“While our activities in the Operation Claw-Eagle 2 area were continuing, the mortal remains of 13 citizens who were detained in a cave were found. The cave was taken under control following the intense clashes”, said Hulusi Akar at the operations center on the border in southeastern Sirnak province.

“According to the information by two terrorists captured alive, our citizens were martyred by the ‘cave manager’ before the start of the anti-terror operation in the hideout.”

He said following an evaluation, it was determined that the innocent and unarmed Turks were martyred by being shot — one in the shoulder and rest in their heads.

The minister said, “All terrorists who killed our citizens were neutralized.”

In a meeting on Monday, Greece and the Greek Cypriot administration continued to press for a federation solution for the island, though this proposal has yielded nothing in a half-century of efforts.

In a joint statement following a meeting in Southern Cyprus, Greek Prime Minister Kyriakos Mitsotakis and Greek Cypriot administration leader Nicos Anastasiades reiterated their desire to participate in an informal 5+1 meeting on Cyprus – comprised of the two sides on the island, the guarantor countries and the UN. But they declared their refusal to any proposal based on a bi-communal two-state solution.

Mitsotakis underlined that Greece’s top priority in Cyprus is finding a functional solution that can be accepted by the two sides of the island, and argued that the Turkish side’s insistence on a two-state solution is rejected by the European Union.

Anastasiades stated that reunification of the island should include the end of the “outdated” guarantor system and the withdrawal of Turkey’s troops from Cyprus. These forces had been deployed to the island to protect Turkish Cypriots from ethnic violence.

On Monday, Greek Premier Mitsotakis called for ending the so-called “Turkish occupation” on the island, saying the only solution to the Cyprus question was a federation of the two parts.

While Greece and the Greek Cypriot administration support a federation on Cyprus, Turkey and the Turkish Republic of Northern Cyprus (TRNC) insist on a two-state solution that reflects the realities on the island.

Ersin Tatar, the President of the Turkish Republic of Northern Cyprus (TRNC), on Tuesday said Greece and Greek Cypriot administration were throwing baseless allegations and accusations at Turkey and Turkish Cypriots, which might disrupt dialogue and negotiations at a time of ongoing for an unofficial UN-sponsored conference on the island of Cyprus.

Tatar said his administration was determined to protect the sovereignty of its people along with Ankara’s military presence and role as a guarantor country on the island.

The President underlined his country’s will to realize the two-state model, which he referred to as the “only realistic solution”.

Tatar further noted that the Greek Prime Minister accused Turkey of being an occupying force on the island, insisting that this was an attempt to cover up the real occupying element.

Turkey believes in a fair and permanent solution to the Cyprus issue, the country’s Vice President said during a visit to Northern Cyprus on Wednesday.

“We stand against injustice and support efforts for a solution on the Cyprus question. The Turkish side favors a fair and permanent solution”, Fuat Oktay told at a joint press conference in Lefkosa, the Turkish Cypriot capital, with Ersin Tatar, the President of the Turkish Republic of Northern Cyprus (TRNC).

“The sincere attempts of the Turkish side to solve the Cyprus question in favor of all the Cypriot people have been undermined by the ‘maximalist’ demands of the Greek side,” he said, adding that those attitudes continue.

Stressing that Turkey will never abandon Northern Cyprus, he said there are two separate communities, democracies, and states on the island.

Oktay said that Turkey, as a guarantor country will continue to support the Turkish Cypriots in their rightful struggle.

“We provided full support to the TRNC government on the town of Maras. We will maintain our support under all circumstances”, he added.

Maras, also known as Varosha, was partially reopened to the public on October 8th after having been for decades a “ghost town” with no access for anybody since the 1974 Peace Operation.

The lockdown and vaccination efforts against the pandemic

The number of people in Turkey who were vaccinated against the coronavirus passed 3.72 million, according to the Health Ministry’s latest data.

Since last December, Turkey has also been implementing curfew on weeknights and the complete weekends to curb the spread of the virus.

Despite all the lockdown and vaccination efforts, the number of daily cases has seemingly pinned around 6287 (666 symptomatic) as of this Sunday.

The number of daily deaths however, has been steadily decreasing down to 94, for February 14th.

On the new mutations of the coronavirus, Minister of Health, Koca said 263 UK variants, 23 South Africa variants and 106 of unknown origins were detected in Turkey.

Koca declared that it might be possible to ease restrictions in certain provinces or regions in accordance with the criteria that the advisory board will determine, but still also mentioned that the committee warns against rushing into easing restrictions.

Vaccination for people over 65 years started as of Friday, Fahrettin Koca added on Twitter. Their spouses will also be vaccinated if they are aged over 60, he said.

The citizens are getting the vaccine at medical institutions upon prior appointments.

Vaccination appointments for people who fall in the high priority category can be made online, through mobile applications or via the helpline.

The second dose of the vaccine is administered 28 days apart, and those who recovered from COVID-19 will not be vaccinated in four to six months following their recovery.

Turkey began its mass COVID-19 vaccination campaign on January 14th, starting with healthcare workers along with top officials to encourage public confidence in the vaccines.

Turkey targets to vaccine 60% of its population, with the second doses of vaccines for people who got the first dose to start on Thursday, the country’s health minister said on Wednesday.

Addressing a news conference in the capital Ankara following the meeting of the Coronavirus Scientific Advisory Board, Fahrettin Koca said teachers, especially those who will join in-person education, would start receiving vaccine shots towards the end of February.

Starting on March 1st, primary schools, including all grades, will resume in-person education twice a week.

Also, schools will open their doors for students of 8th and 12th grades on March 1st to help them prepare for high school and university entrance exams.

Koca said Turkey ensured at least 15 million COVID-19 vaccine doses and reached an agreement on over 100 million doses of vaccines in total.

“Our citizens must know that we are trying to buy the vaccine from all companies that can provide it until March or April”, he explained.