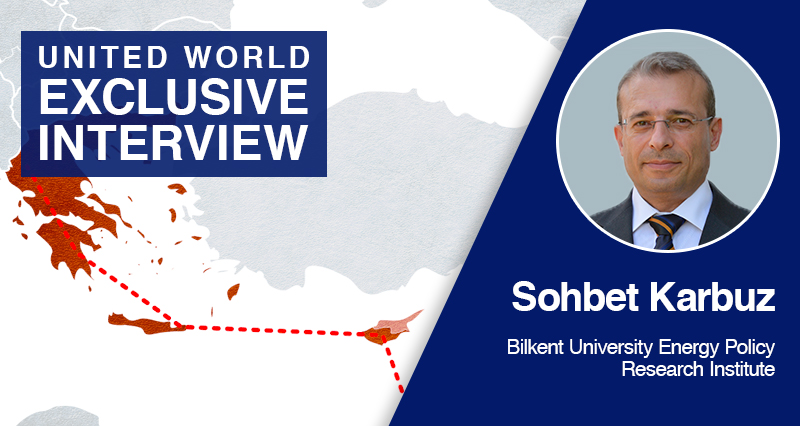 Israel says it would only be pleased to have Turkey participate in the upcoming Eastern Mediterranean Gas Forum (East-Med Gas Forum). However, Energy Expert Sohbet Karbuz argues that in doing so, Turkey would be “knowingly outmaneuvering itself,” as participation would imply official level interaction with the Greek Cypriot Administration of Southern Cyprus (GCASC).

The East-Med Gas Forum was established last year with the signatures of 6 countries (Egypt, Greece, the GCASC, Israel, Italy and Jordan). Five of these countries have ratified the Forum Statute in their parliaments. Thus, a sufficient number was reached for the document to enter into force. Although Palestine attended the meetings primarily as a participant, the country did not take part in the meeting in Cairo on September 22, 2020 and did not ratify the Statute. The United States, which the forum members invited to become a “permanent observer”, made its official application on January 13. France and the United Arab Emirates (UAE) are also expected to become members of the Forum this year.

In light of these developments, the Turkish Ministry of Foreign Affairs stated that “no initiative will be successful in the Eastern Mediterranean unless it includes Turkey and the Turkish Cypriots”. Israel, on the other hand, issued a statement that indicated otherwise. “I would be pleased if Turkey wanted to join the East Mediterranean Gas Forum as part of regional cooperation,” Israeli Minister of Energy Yuval Steinitz wrote.

We discussed this Israeli message, the future projects of the East-Med Gas Forum, and Turkey’s priorities with Assoc. Prof. Dr. Sohbet Karbuz from the Bilkent University’s Energy Policy Research Institute.

“The Forum does not have a solid project”

Before discussing Israel’s message, let’s get to know the Gas Forum a little more. What is the purpose of this partnership, and what are its priority projects?

The aim of the Forum is to increase cooperation between countries in the region over gas. There is no concrete project being put forward by the Forum, but the Eastern Mediterranean Gas Pipeline and 2 electricity cable projects are on the agenda. One of these is between Cyprus and Egypt; the other is between Israel, Cyprus and Greece. Of course, no country can simply say “these projects are the priority of the Forum.” There are differing opinions, but the electrical interconnection has a bigger chance of being realized. The biggest problem of all these projects is financial. EU funds were expected to finance the gas pipeline, but these hopes have now been dashed. The project has not gone any further than empty political speeches.

How does the absence of Turkey at the Forum affect these projects?

Turkey’s absence is not a crucial factor in realizing these projects. A legal and political complication might occur concerning the authority on the part of the sea where the pipeline or the cable will pass. However, Turkey does not possess anything like a veto right under international law.

How will these projects be financed? How sustainable are they?

Unless the projects are commercial and profitable, it is very difficult for them to find funding. I do not think that the member countries will meet the burden of these projects out of their pockets. I do not think financial institutions will provide financial support, especially for the gas pipeline. There are no long-term buy-sell agreements. There are also no people committed to buying and selling the gas. Therefore, there is only the policy material that exists on paper.

“Membership could lead to great challenges”

Israel indicated in the past weeks that Turkey might be included into the Forum. Is this possible? With which project can Turkey be part of this partnership?

The biggest obstacle for Turkey to become a member of the Forum is the Cyprus problem. How will you strive for common goals and sign presidential declarations with a country you do not recognize? I do not think Turkey will participate in the Forum, even if they are invited, because of this. Joining the European Union is not very different in this respect. How can you say that you want to be a member of the Union and at the same time not recognize another, already existing member? Additionally, Turkey has to accept the Statue of the Forum if it joins. The acceptance of this Statute can cause severe problems. The Forum Statute was prepared with all of this in mind: Should Turkey want to join the Forum, it will be obliged to accept the Statue, and thus, corner itself in the Cyprus Question knowingly.

Can energy cooperation be established between Turkey and Egypt?

Turkey should improve relations with Egypt. The TPAO (a State Owned Turkish Petroleum Company) can participate in exploration and production processes there. Gas trade can flourish, and thus, Turkish energy companies can achieve investment opportunities in Egypt.

Tevfik Kadan
Tevfik Kadan was born on April 27, 1990 in Isparta.He studied Turkish Naval High School and Academy.He took computer and electrical electronics engineering courses and worked as a Freelance Consultant Engineer for some time.Kadan has been working in the field of journalism since 2010, and served as the Head of Vatan Party Press Office for 2 years and as Aydınlık Newspaper’s News Manager for 2 years. He works as the Editor in Chief at Aydınlık.com.tr.