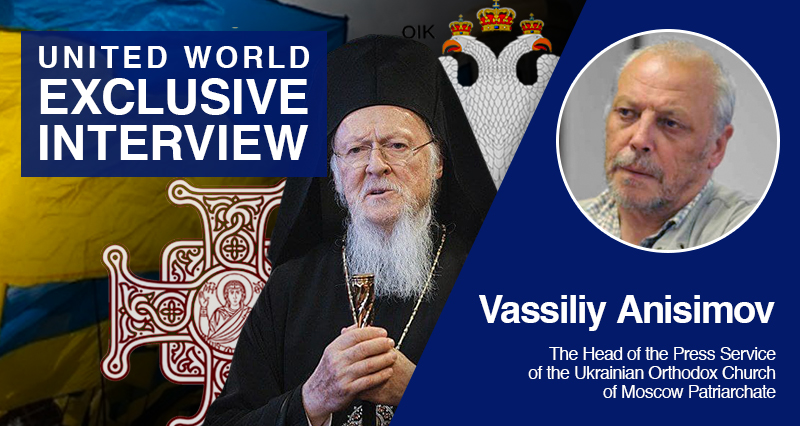 Vassiliy Anisimov, the Head of the Press Service of the Ukrainian Orthodox Church of Moscow Patriarchate, in an interview to the “United World International” accused Fener (Istanbul) Patriarch Bartholomew of dividing the Orthodox world.

Fener Patriarch Bartholomew claims to be the leader of the whole Orthodox world and he has declared that he will visit Ukraine in August of this year. This also raised tensions in the Moscow Patriarchate.

On those questions, we did an interview with the Head of the Press Service of the Ukrainian Orthodox Church of Moscow Patriarchate Vasiliy Anisimov:

Fener Patriarch claims to be the head of the whole Orthodox world. Do you agree with that?

Anisimov: How can there be such a claim? We didn’t participate in the election of the Fener Patriarch. If we had participated in such an election, Bartholomew would not have been able to be elected patriarch. The patriarch was elected by the Greek Orthodox community of Istanbul and he can be the head of only those people.

Anisimov: Well, look, our church (Ukrainian Orthodox Church of Moscow Patriarchate) is a real Ukrainian church and it has an uninterrupted history of more than 1000 years. In other words, our church exists here for more than 1000 years and this church has managed to survive the concentration camps of Stalin. Even among today’s clergy of our church there are people who have experienced this oppression. For example, Metropolit of Nicolaev Pitirim spent many years in such camps and he was released only during Gorbachev’s rule, ie, at the end of the Soviet rule. We have such a tradition. We have an uninterrupted chain from the beginning. On the other hand, this so-called new church can go back only to 1992, when the then President of Ukraine Leonid Kravchuk established the so called Kyivan Patriarchate.

Why, do you think, Fener came into conflict with the Moscow Patriarchate?

Anisimov: There are mainly two reasons. The first reason is his own arrogance. The second reason is that the US has provoked the Fener Patriarchate to take such actions. As Patriarch of Moscow Cyrill reiterated recently, today Fener is under intense influence of the United States. This provocation of the United States and Fener caused a split in the Orthodox world among the Greek Orthodoxes and Slavic Orthodoxes. The American interference to Orthodoxy via Fener caused great harm to Orthodoxy.