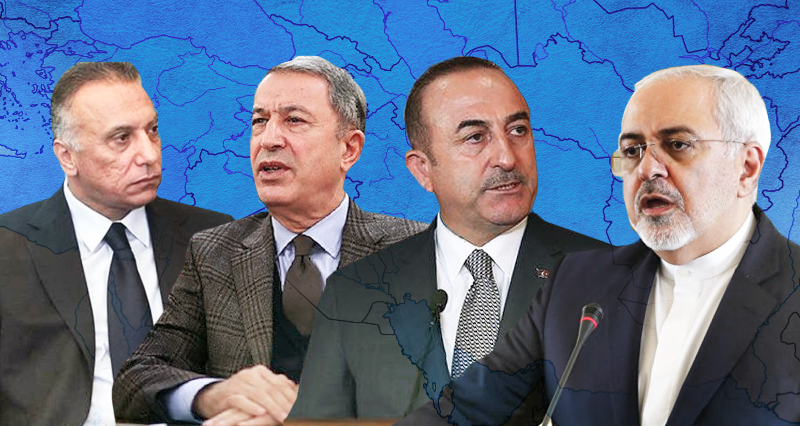 Last week, the public agenda in Turkey was busy with three important events.

The first was the Defense Minister Hulusi Akar’s visit to Baghdad, where he met important Iraqi officials to discuss important strategic issues.

The second was the important diplomatic meeting between the foreign ministers of Iran and Turkey. During the meeting, Mevlut Cavusoglu and Javad Zarif discussed bilateral relations and their views on regional issues including Syria, Iraq, Gulf and South Caucasus.

The third event was the vaccination efforts by the Ministry of Health, and the latest developments around the coronavirus pandemic in Turkey.

Combating terrorism was the main focus of discussions during the visit, alongside joint cooperation between Turkey and Iraq, said a ministry statement.

Speaking at the meeting, Akar praised the close relations between Turkey and Iraq, saying the region is going through a “sensitive” period.

“We can overcome the difficulties in our region together … We respect Iraq’s territorial integrity, sovereignty, well-being and prosperity,” Akar said.

He further stressed Turkey’s determination to protect its border security and its readiness for all means of cooperation with Iraq, saying that this would be critical in fighting the PKK terrorist group located there.

Later on, Al-Kadhimi received Akar and Guler at the government palace.

They discussed common issues of interest and boosting military solidarity between the two countries, according to the Iraqi Prime Ministry press office.

Al-Kadhimi said the agreements the two countries reached during his visit to Ankara last month must come into force.

Al-Kadhimi visited Turkey on December 17 and met with President Recep Tayyip Erdogan to discuss bilateral and economic ties as well as regional developments. Turkey appreciates the operations conducted by Iraqi authorities against the PKK terrorist group, Erdogan said at a joint news conference with al-Kadhimi in Ankara.

Underlining that Turkey and Iraq have agreed to continue fighting against their “common enemies,” namely the PKK, ISIS and the Gulenist Terror Group (FETO), Erdogan said that separatist terrorism has no place in the future of Turkey, Iraq or Syria.

Al-Kadhimi also highlighted the importance of Turkey fulfilling the financial pledges it made at the 2018 International Conference for the Reconstruction of Iraq.

He continued to say that Iraq rejects terrorist attacks carried out from Iraqi territories against Turkey and that Turkey’s support is needed to strengthen the Iraqi army.

Akar, for his part, said that Turkish Armed Forces are ready to support the Iraqi army in the fields of counterterrorism, training, and consultancy.

Akar and Guler were also received by President Barham Salih at the Presidential Palace.

During the meeting, the two sides discussed cooperation in all areas, according to the Iraqi Presidency.

Salih highlighted the importance of reducing tension in the region and regional cooperation in the fight against terrorism.

Akar, for his part, said that Turkey respects Iraq’s sovereignty and stability and stressed the importance of joint solidarity and coordination.

Speaking at a welcoming ceremony, Akar said Turkey is ready to give the necessary support for efforts to clear Iraq of all terrorist groups, especially ISIS and the PKK.

Afterward, Akar also visited a cemetery and museum built in memory of those who lost their lives during the fight against ISIS.

“Cooperation between Turkey and Iraq is of critical importance for ensuring stability and security in the region,” Akar wrote in a memorial guestbook.

Foreign Minister Mevlut Cavusoglu held a meeting in Istanbul with Javad Zarif of Iran on January 29.

The Iranian foreign minister hailed relations with Turkey, adding that ties will deepen when the US adopts more reasonable attitudes.

He went on to say that cooperation between Turkey and Iran in the Caucasus will definitely benefit regional countries.

“Iran-Turkey relations are very important for us and filled with mutual benefits,” Zarif said.

He expressed the hope that the trade volume between the two countries will return to the pre-pandemic and pre-embargo days.

“Unfortunately, the US is used to imposing sanctions,” Zarif said.

Minister Cavusoglu emphasized that it was necessary to work to make the ceasefire permanent in the South Caucasus, to strive for the stability of Syria and Iraq, and to establish a tripartite mechanism with Afghanistan.

Speaking in a joint news conference after a bilateral meeting in Istanbul on Friday, Cavusoglu said Turkey has multiple diplomatic mechanisms with Iran, including the ones in the Caucasus and the Astana Format for Syria

“We are working on a mechanism with Afghanistan as well,” he said.

Noting that the two countries are located in a region “plagued by many problems,” Cavusoglu said they need to work to not only strengthen bilateral ties but also the strategic partnership.

Zarif also said relations between the two countries have survived “even in the hardest times.”

“These well-established relations will be sustained in the future as well,” Zarif said.

The Iranian top diplomat also said Ankara-Tehran cooperation in the Caucasus region would also benefit the people of the region.

He noted that the two countries are working with Afghanistan for a trilateral mechanism upon the request of the Kabul administration.

Turkey’s Foreign Minister Mevlut Cavusoglu said that he hopes the Biden administration would return to the nuclear deal and lift sanctions on Iran.

Cavusoglu said that Turkey has always supported the nuclear deal that was reached by the US, EU, and Iran: “I hope the Biden administration will return to the agreement and so the sanctions on brotherly Iran will be lifted.”

LOCKDOWNS AND VACCINATION EFFORTS AGAINST THE PANDEMIC

Since the Turkish government introduced nighttime and weekend curfews to curb the spread of COVID-19 back in late November, the number of cases has dropped to 6,562 (641 symptomatic), and the number of daily deaths to 128.

Turkey began administering the coronavirus vaccine on people aged 75 and above, completing the vaccinations of all healthcare workers and nursing home workers.

Nationwide vaccination started on January 14 after the Chinese Sinovac vaccine was granted emergency use approval by Turkey’s drug regulatory authority.

So far, senior citizens over 80 years old at care homes or their residences have been vaccinated.

Vaccination is ongoing for employees at pharmacies and students studying the subject at the university level.

According to the official figures released by the Health Ministry, Turkey has vaccinated 1.524 million people as of Thursday morning, including frontline health workers.

The second shipment of a second batch of COVID-19 vaccines ordered from China arrived early Friday in Turkey.

A Turkish Airlines plane that departed from Beijing landed at Istanbul Airport, carrying 3.5 million doses of the vaccine.

A total of 10 million doses of the vaccine were imported in the second batch.

The first batch of vaccines consisted of three million doses.

Dr Afsin Emre Kayipmaz, a member of Turkey’s Coronavirus Scientific Advisory Board, said people should continue to follow measures especially during the winter months and noted there has been an increase in coronavirus infections in Turkey in the past four days.

Kayipmaz said that lockdown measures in the last couple of months are a major factor in reducing cases and deaths.

He added the vaccination process for social immunization in Turkey had already started but it was only performed on a part of the society and urged the country to continue to follow measures for a while until the immunity rate goes up.

Kayipmaz stressed that January, February and March saw a rise in other upper respiratory tract diseases as well.

As the number of cases were dropping, some people started to question when the measures and curfews will be relaxed, if not lifted altogether.

Dr Kayipmaz said that some European countries are currently experiencing a third wave while others have already seen their first and second wave before Turkey.

Kayipmaz said Turkey may face a similar danger if measures are relaxed and that this might prolong the time it takes for things to return to normal. He noted mutations of the virus have recently been seen in Turkey, including a descendant of B117, a mutation that allows the virus to be transmitted more easily.