“Egypt, Turkey, Iran and the Gulf countries have common interests” 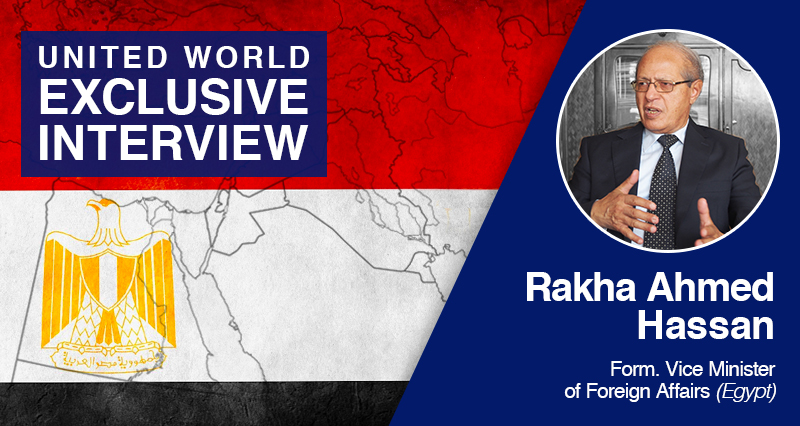 The US elections, the recent events in Libya and reconciliation in the Gulf are not only on the agenda of Turkey but also on that of the world.

I interviewed Rakha Ahmed Hassan, former Vice Minister of Foreign Affairs of Egypt, another key country of West Asia besides Turkey and Iran, Egypt’s perspectives on the issues as well as stance towards Turkey.

Rakha Ahmed Hassan, whom I had the opportunity to meet many times in Cairo, is a name that still has a lot of weight in Egyptian foreign affairs despite his retirement.

Ahmed Hassan is a member of the Egyptian Council for Foreign Relations, a think tank active in Egyptian foreign policy, and writes weekly foreign policy reviews in Al Shourouk, one of the country’s leading newspapers.

I hope that the evaluations and messages coming from the other side of the Eastern Mediterranean will open new horizons at a time when one-sided point of view prevails and everyone is scrambling on their own right.

‘WE DIFFER FROM THE US IN SYRIA, LIBYA AND PALESTINE’

The politics of Joe Biden, who settled in the White House after the controversial elections in the US, towards West Asia and Africa are a hot topic of discussion.

Egypt is a country that has had close relations with the US since the time of Enver Sadat. Although relations between the two countries deteriorated in 2012-2013 due to Washington’s support for the Muslim Brotherhood, the Washington-Cairo line calmed down during Trump’s tenure.

It is a big question mark how Joe Biden era, who openly supports the Muslim Brotherhood and will bring back the staff of the Obama era, will affect the Egypt-US relations.

I asked Hassan about the general trend in Egypt’s relations with the United States.

“Egypt and the US have strategic relations,” Hassan stated and issued the following evaluations on the issue; “We have strategic relations with the US in the military, economic and political fields. But in some areas we can also talk about differences between Cairo and Washington. The solution of the Palestinian issue is one of them. The international public has accepted the two-state solution and the establishment of the Palestinian state within the borders of 1967. Egypt and the US also agree on the two states solution, but we have differences about applying it.

Another issue where we differ from the US is in terms of our view of regional crises; Egypt is a regional power, and the US global. Egypt’s view of some events in the region, such as the crisis in Syria and Libya, is different from the US. These differences do not affect the relations between the two countries in general.

During the Trump era, the issue of “human rights” was frequently brought before Egypt by the US Congress and the State Department. In this process, Egypt’s fight against terrorism and different conditions in the country were not taken into account. “

Hassan evaluated the changes to be experienced with Biden with the following statements;

“We understand from the statements of Biden and his team that they lean towards a two-state solution in Palestine. If they take such a step, it will be in line with the Egyptian and Arab point of view.

Second, there is talk of the possibility of returning to a nuclear agreement with Iran. If this happens and the US lifts its sanctions against Iran, it will be good for the region. This could ease the situation in Syria, Iraq and Lebanon. It could also reduce the tension between the Gulf countries and Iran. Egypt would react to this positively.”

‘A DEAL WITH TURKEY IS POSSIBLE, BUT …’

Libya is one of the areas that brings conflict to Turkish-Egyptian relations.

Ankara and Cairo have been in opposing camps since the beginning of the process in Libya. But in recent months, Egypt has remarkably increased their contacts with The Government of National Accord (GNA), which is supported by Turkey, and which is recognized by the United Nations.

On December 26, a Turkish delegation headed by the Minister of National Defense Hulusi Akar met with the GNA officials in Tripoli, while a high-level delegation from Egypt visited the city.

The Turkish and Egyptian delegations’ visit to Tripoli on the same day brought forward the question of whether there were any trilateral talks between Turkey and Egypt and the GNA.

I asked the retired diplomat about the issue, and he had several remarkable evaluations;

“The Egyptian government has been meeting with the GNA officials for nearly 2 years. Mr. Fayiz es Serraj and other officials visited Cairo many times. However, the talks had stopped due to the tension of the last months. Afterwards, relations were revived with the visit of Interior Minister Fethi Başağa to Cairo and the visits of Egyptian officials afterwards.”

Hassan said the following about the prospect of the deal between Turkey and Egypt in Libya;

“Turkey must first take the initiative in relations with Egypt. Turkey should take the first step by deeds, not just nice statements. As I have stated many times before, Egypt does not want interference in its internal affairs. There is no reason not to pursue improvements in relations if Turkey not only issues statements but also takes concrete steps. If Turkey stops hosting figures conducting anti-Egypt activities, our relationship can be stabilized.

On the other hand, there are more players than Egypt and Turkey in Libya. There are many, especially the US, Russia and some European countries.

As Hassan Salamé, the former special envoy of the United Nations in Libya, stated, the solution of the problems in Libya is not military, and can only come from peaceful means. Egypt is ready for a political solution. The Libyan parties must come together and find a common solution.”

“AHMET MAITEEQ MAY BE THE ONE”

Hassan also shared his views on GNA Vice Prime Minister Ahmed Maiteeq, who stands out as a name the parties can agree on;

“First of all, Libyan leaders must come to an agreement on this issue. Akile Salih also has claims about the temporary process and its aftermath. On the other hand, General Khalifa Haftar does not want to give up his power. UN Libya Representative Stephanie Williams is meeting with the parties. The UN’s efforts are important. An agreement must be reached between different parties. The complicated situation continues in Libya (…) Maiteeq may be the one, but as I said, the priority is the agreement of the parties in Libya, otherwise the game will be broken again.”

“A DEAL WITH QATAR IS AN IMPORTANT FIRST STEP”

Another issue on the agenda of the region is the reconciliation reached between Qatar and other Gulf countries.

“We cannot talk about a general consensus in the Gulf, but an important first step has been taken in this way. With this agreement, the Gulf Cooperation Council, which was paralyzed by the crisis, becomes operational again. In this way, they can start meeting with other forces, especially the US, EU and Russia.

Egypt still has some issues to resolve with Qatar. Their relations with the Muslim Brotherhood, the residence of the names affiliated to this organization in Qatar, etc… but this agreement is an important step to open the door.”

The effects of the agreement in the Gulf for Turkey are often discussed. The retired diplomat evaluated the issue as follows;

“The agreements in the Gulf are not against Turkey. I understand that Saudi Arabia will even improve relations with Turkey. Turkey, Egypt, Iran and the Gulf countries have common interests.

Getting along with someone doesn’t mean your relationships with another will deteriorate. There are still many Turkish investments in Egypt. I hope Turkey will take the necessary steps on how to fix relations with Egypt.”

“WE CANNOT TALK ABOUT SECURITY IN THE GULF WITHOUT INCLUDING IRAN”

Hassan also considered anti-Iran bloc allegations in connection with the deal in the Gulf;

“The anti-Iran bloc was an idea of the Trump era. When you examine the Gulf Cooperation Council, you will see that Kuwait and Oman have good relations with Iran. Kuwait has deep relations with Iran, as Oman is a country that plays a mediator role in the negotiations between the US and Iran. The trade volume between the United Arab Emirates and Iran in 2019 was approximately 15 billion USD.

Common interests between Iran and the Gulf states are greater than any disputes.

In addition, the security of the Gulf depends on the cooperation between the Gulf countries and Iran. It is not possible to talk about Gulf security without considering Iran.

If the Gulf countries deepen their cooperation with Iran, the tension in the region will be eased and the problems in Yemen, Syria and Iraq will be solved more easily.”

While Hassan’s statements reflect Egypt’s expectation from Turkey to take concrete steps, they also provide hints that a political consensus is possible on Libya.

What is striking is the positive statements of the Egyptian diplomat regarding Iran, given that diplomatic relations have been troubled between since 1979.

It is high time for Turkey to abandon its bad habits from the previous period, and join the emerging multipolar world.