Ethiopian instability: rising terror and the international occupation of GERD 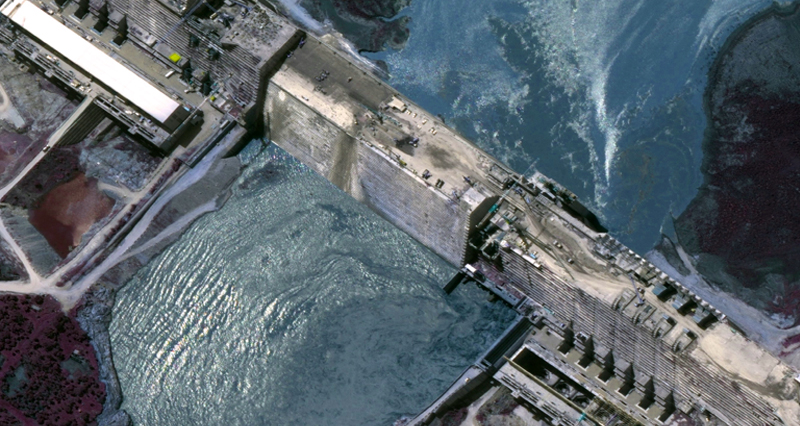 Ethiopia is on the verge of collapse due to internal tensions, which could result in serious problems for most of Africa, but opportunities for some.

On December 27, Egyptian President Abdel Fattah El-Sisi announced that he would seek to conclude “a binding legal agreement” on the Grand Ethiopian Renaissance Dam (GERD) with Sudan and Ethiopia. The Egyptian head of state said this during his conversation with South African President Cyril Ramaphosa.

Talks between Sudan and Ethiopia resumed in mid-December over the future energy and water project. For Ethiopia, the construction of the GERD means achieving energy independence and becoming an energy superpower that could profitably sell electricity to other countries in Africa (subject to investments in power grids). However, for Egypt, the creation of a reservoir in Ethiopia means control over a most important resource, on which the lives of all Egyptians depend – the Nile. There are justified fears that the reduction of water in the Nile could lead to disastrous consequences for Egypt, a drought and a social explosion that would tear apart the entire Middle East.

Thus, in terms of its explosive and destructive potential, the Ethiopian Hidase hydroelectric power plant could be much more dangerous than the Chernobyl nuclear power plant.

There may also be water problems for Sudan, although, on the other hand, Ethiopia has previously promised to share electricity, and the creation of the reservoir may allow to regulate the water level in the Nile and not to fear floods.

Ethiopia wants to fill the reservoir within seven years. In turn, Egypt, which fears the shallowing of the Nile, insists on a 21-year period of filling.

The Renaissance hydropower plant is located in the very north of Ethiopia near the border with Sudan. Another negotiation between Ethiopia, Egypt, and Sudan over the operation of the facility and its reservoir began last summer under the auspices of the African Union. A new round was attempted in November, but Sudan, which chairs the trilateral talks, said new approaches were needed to bring the parties closer together on a number of key provisions. The impasse of the talks was caused by the unwillingness of Ethiopian side to make compromises.

The Hidase hydropower issue is thus not just an economic or natural resource management issue. It is a political issue that is important for all of Africa – and by implication, for the Middle East and the rest of the world. Nevertheless, until the last day, the Ethiopian side refused to compromise with Cairo and Sudan, declining in every way to impose joint management of the dam or a new binding agreement.

The break in the GERD negotiations occurred against the backdrop of the civil war in Ethiopia. On November 4, 2020, the Ethiopian army launched an operation against the Tigray People’s Liberation Front (TPLF) in the north of the country. The reason for the start of hostilities was an alleged attack by the TPLF on government forces. By the end of November, the Ethiopian army had entered the regional capital, Mekelle claiming victory. However, the fight continues.

On December 13, it became known that Ethiopia and Sudan had reached an agreement to resume trilateral talks on the Ethiopian Renaissance hydropower plant under construction on the Blue Nile.

However, the Ethiopian side initiated new tensions following that. On December 17, Sudanese army units came under artillery fire from Ethiopia when they were on the Sudanese side near the border between the two countries. Anadolu reported that Ethiopian forces and militias from Amhara state ambushed an army patrol in Sudanese territory on December 16. According to the Somali Guardian, four Sudanese soldiers were killed and 12 others were wounded. It indicates that the actions were carried out by militias from Amhara.

Negotiations were later attempted by Khartoum and Addis Ababa, in which the states failed to reach consensus on the location of common borders.

On December 27, the Sudan Armed Forces reported that they had liberated 11 settlements that had been under Ethiopian control for the past 26 years. The source says the army of the Eritrean State approached the border at that time. According to numerous reports, up to half of the Eritrean army is now in Tigray. The regime of Isaias Afwerki has allied itself with the central government in Addis Ababa in the current conflict.

Ethiopia’s worsening relations with Sudan seriously complicates the stability region, which has already seriously deteriorated since Ethiopia’s war in the Tigray State.

The ongoing fighting in Ethiopia could lead to a humanitarian disaster in neighboring countries.

The number of refugees from Ethiopia who arrived in Sudan fleeing the fighting in the Tigray state has reached nearly 46,000. As noted by the Red Cross, a “catastrophic humanitarian crisis” is unfolding in Ethiopia and beyond its borders, and “thousands of people are crossing the border into Sudan. “Refugees from Tigray accuse Ethiopian authorities and Amhara militants of ethnic cleansing and genocide and refuse to return home, fearing for their lives.

As UWI wrote earlier, Ethiopia’s civil war and Prime Minister Abiy Ahmed’s regime’s reliance on Amhara militias has led to an ethnicization of the conflict.

The result has been the suppression of the Tigray people, who make up 95% of the state’s population.

The aggravation with Sudan is largely due to the strengthening of Amhara militias, which are trying to rely on disputed areas. Simultaneously, in other parts of Ethiopia, Tigrayans have been dismissed from government agencies and discriminated against.

Abiy Ahmed’s attempts to suppress the TPLF and impose a more centralized system of government instead of current ethno-federalism because of a bet on Amharic nationalism led to a strengthening of Amharic groups.

Clashes with Sudan were the consequence. This begs the question; to what extent does Addis Ababa now control “its” militias in Tigray? Who has more power, Abiy Ahmed or Amhara nationalists who want to re-establish the rule of its people over the whole Ethiopia, which was interrupted for 30 years by TPLF? The latter was the de-facto ruling party in Ethiopia from 1991 till 2018.

The second question is, to what extent is Addis Ababa now ready for compromises on other fronts, including the GERD, after the “victory”? Has the military victory turned Ethiopia’s leadership’s head? It now needs to maintain its reputation as a strong and uncompromising leader.

The brutal suppression of Tigray people has very probably caused anxiety in other states. Overcoming resistance in Oromia is on the agenda for the near future.

The opposition Oromo Liberation Front opposed Ahmed’s plans for June 2021. Thus, new major conflict in Ethiopia is brewing. The Oromo, however, make up one third of Ethiopia’s population

Ethiopians need an external enemy to cement a state disintegrating in response to a surge in Amharic nationalism. Sudan and Egypt could be such an enemy. This means that the situation on the border with Sudan will be tense, and neither Cairo nor Khartoum will receive concessions on the dam.

Moreover, outside players must take into account the messianic component of the ideology of the current Ethiopian prime minister. A Pentecostal believer, he considers himself God’s chosen one. His supporters consider him almost a messiah. It is hard to expect concessions from such a man. At the same time, Abiy Ahmed’s centralist aspirations and attempts at a multi-ethnic federation established in 1995 will lead to resistance from regional and ethnic elites, undermining stability in Ethiopia.

It is worth noting the intensification of the insurgency in different parts of the country. For example, on December 23, at least 100 people were killed by Gumuz insurgents in Benishangul-Gumuz region. There has been an outbreak of violence in the region since September, exactly the region where the GERD is located.

In response to the latest attack, the Ethiopian government said it would deploy additional military forces to the region. Five high-ranking officials in the region have been arrested.

At the same time, a conflict broke out between the authorities of Amhara State and Benishangul Gumuz. The latter criticized the forces that seek “”to dismantle the multinational federalism and overthrow the constitutional order, and to destabilize the centuries-old unity among people.”

There are also reports of Oromo Liberation Army (OLA) attacks against the Amharas in the Oromo region. In December 2020, 10 members of opposition party Oromo Liberation Front (including two journalists working for its broadcast, Sagalee Bilisummaa Oromo), were arrested by government forces.

Theoretically, we cannot rule out the possibility of an escalation of the conflict or series of inter-ethnic conflict in Ethiopia. Then perhaps the world community and Sudan and Egypt as the most interested parties will have to take control of the GERD.

Nobody can allow such a facility to fall into the hands of terrorists and extremists and become a bargaining chip in the confrontation between intra-Ethiopian groups.

According to Global Terrorism Index, Ethiopia with Burkina Faso, Mozambique, DRC, Mali, Niger, and Cameroon was among the 10 nations witnessing the largest increase in terrorism in the world.

Somalia’s al-Shabab group may be taking advantage of the unstable situation in Ethiopia to increase its activities in the country. In November, Ethiopian security forces “arrested 14 suspected members of al-Shabaab and ISIS accused of planning terrorist attacks in the capital Addis Ababa and other parts of the country,” Bloomberg reported. In 2019, there were reports that ISIS aimed to intensify its activities in Ethiopia, starting from releasing jihadist materials in Amharic. It also may exploit the expected rise of instability in Ethiopia. Interethnic conflicts tinged with religion may be a breeding ground for increased terrorism.

In June, about 500 Christians in Ethiopia were murdered by “Oromo Muslim extremists”. In turn, in January 2020, more than 4 mosques were set on fire in Ethiopia. Muslim property was destroyed. Muslim community representatives claim “there is a spread of hate speech lined with orchestrated Islamophobic videos in churches.”

One thing is clear: from a country that has provided peacekeeping and counterterrorism efforts in South Sudan and Somalia, Ethiopia itself is becoming a source of threats to the region. An explosion of violence and religious extremism in Africa’s most populous country could have dire consequences for the entire region.

The way to the abyss

Ethiopia’s civil war is not over. Its consequences are continuing, making Addis Ababa’s politics less and less sane and responsible. The consequence of this imbalance could be the final disintegration of Ethiopia, and, in the short term, the exacerbation of all conflicts with its neighbors. Neighboring countries and countries in the region must prepare for this scenario, including the need to occupy the Grand Ethiopian Renaissance Dam area to safeguard it from terrorists. In the near term, Ethiopia will not agree to a binding legal agreement concerning GERD. However, current trends could lead to international control of the dam without its consent.

Ethiopia needs a balance of centralist and centrifugal tendencies to avoid this scenario, to diversify its international relations and try to find partners to come to terms with neighbors. After the US failure to establish dialogue between Cairo and Addis Ababa, the latter may try to approach China, Russia and as intermediary, or use its relations with Turkey to balance external threats and pacify the radicals. However, the ability and willingness of the country’s authorities to take the correct course of action is very much in question.