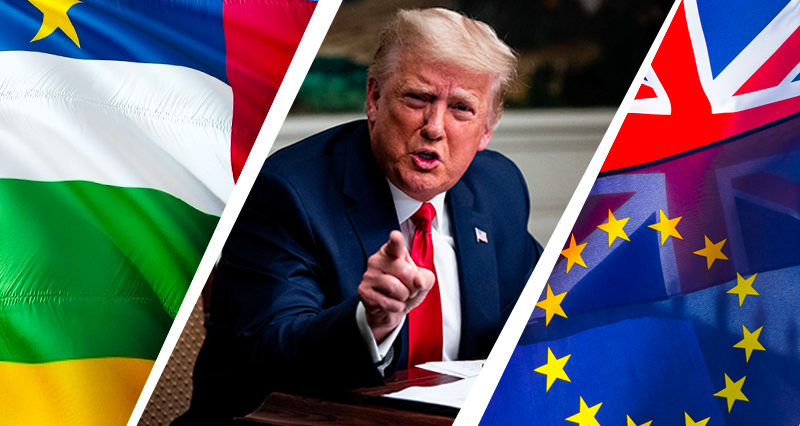 “I am signing this bill to restore unemployment benefits, stop evictions, provide rental assistance, add money for PPP, return our airline workers back to work, add substantially more money for vaccine distribution, and much more,” the US president declared.

However, he refused to approve the bill within days of receiving it, missing the Saturday deadline to prevent the temporary loss of unemployment insurance for some 14 million people.

The coronavirus measure has sparked much controversy among politicians in both the Republican and Democratic parties. The so-called ‘coronavirus relief bill’ contained allocation of mullions of the US dollars to the different projects lobbied by the various groups of interest (including the military industry) and for the promoting democracy, feminism and imperialist projects abroad.

The CAR has held presidential and parliamentary elections on December 27. Despite internal and external attempts at destabilization, the electoral process took place in a fairly calm atmosphere. The international community opposed the postponement of the elections and the destabilization: a team of international observers from various organizations was present at the elections, and nearly 2 million voters voted on Sunday.

News of serious destabilization in CAR was greatly exaggerated by the pro-French opposition in order to disrupt the elections and prevent the possible re-election of Faustin-Archange Touadéra, who seeks more independence from France. Last week the rebel alliance briefly seized Bambari, CAR’s fourth-largest city, but their advance was halted – it was not the first capture of the city, and it was beaten back rather quickly. In addition to their own forces, the CAR enlisted the support of Russia and Rwanda to prevent conflict.

Right before the elections there were other attempts to wreak havoc and disrupt the electoral process – for example, in the town of Boda, 200 kilometers from the capital Bangui, two rebel trucks and motorcycles were seen. Armed men were also seen in other villages.

Over the past five years, groups that have formed the new coalition had committed war crimes, including the deliberate killing of civilians, the rape of women and girls, and the deliberate destruction of civilian property.

The main political figure behind the unrest is François Bozizé, former president, who had come to power in 2003 after military coup,but has been driven out of the country in recent years. He failed to register for the elections, and stepped up his anti-government activities just before the December 27 elections.

According to the CAR government, Bozizé was involved in a recent attempt to destabilize the country and stage a coup d’état. MINUSCA, which has more than 12,800 uniformed peacekeepers in the CAR, issued a communiqué officially stating that Bozizé has allied with armed groups to disrupt the peace and electoral process.

The demand to postpone voting has already been made by the opposition coalition COD-2020, from which the former Prime Minister of the CAR, Anicet-Georges Dologuélé, nominated his candidate for the presidential election.

Against this background, Touadéra’s rating has risen as he seeks to maintain at least basic stability in a difficult region – a country rich in resources, but plagued by poverty and banditry.

Touadéra’s main challenger is the former head of government, Dologuélé, who is supported by Bozizé. The election will go to a second round if neither candidate gets more than 50% of the vote. Touadera is considered the favorite in the presidential race. On December 21, there was a march through the streets of the capital in support of the MCU movement, which has nominated the candidacy of the country’s incumbent President Touadéra.

The post-Brexit trade and security agreement was unanimously backed by EU member states, paving the way for new arrangements to take effect Jan. 1.

At a meeting of ambassadors in Brussels, the 27 member states advocated that the 1,246-page treaty be “provisionally applied” at the end of the year.

In an interview with French newspaper Le Figaro, Michel Barnier said there was a risk that the treaty would lead to a brutal relationship between the EU and Britain, given the potential for tariffs to be applied in the event of regulatory divergence over time.

Prime Minister Boris Johnson hailed Britain’s trade deal with the European Union as a new starting point in relations with the bloc in a conversation with European Council President Charles Michel on Monday.

“Just spoken with @eucopresident Charles Michel. I welcomed the importance of the UK/EU Agreement as a new starting point for our relationship, between sovereign equals,” Johnson said on Twitter.

Niger began voting in the country’s presidential and parliamentary elections on Sunday.

Mohamed Bazoum, the right-hand man of outgoing President Mahamadou Issoufou, is the favorite to win.

President Mahamadou Issoufou is preparing to hand over power after his ten-year term expires.

The country’s 23 million residents have high hopes for change. Niger is still one of the poorest African countries.