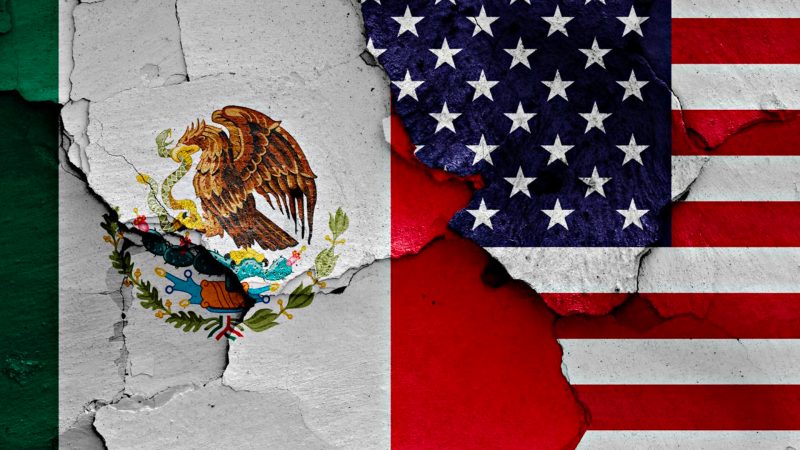 The revolutionary bandit Fransisco “Pancho” Villa had nothing in common with Mexico’s current drug warlords, but he may still have inspired Donald Trump. Pancho Villa was fighting the Mexican army in the aftermath of the Mexican Revolution and raided the US city of Columbus in 1916 in search of weapons. The US considered the Mexican Army too weak to fight Villa and started a punitive, 11-month military expedition deep into Mexican territory.

A hundred years later, US President Donald Trump has threatened Mexican President Peña Nieto in 2017 on the phone with the following words, as leaked to AP: “I think your military is scared of the bad guys. Our military isn’t, so I might send them down to take care of it.”

The US wasn’t able to catch Pancho Villa in 1916 and its current plans for direct intervention have received a huge blow with Mexico’s recent reform of the law of national security – a reform that affects US activities in Mexico and US-Mexican cooperation on a deep level.

Current President Andrés Manuel López Obrador introduced the law amendment early December, it was first ratified by the Senate and lastly on the 15th by the Chamber of Deputies.

The Mexican Senate summarizes in its official declaration the amendment as “regulation of foreign agent activities, facilitation of information exchange on national security matters and defense of the country’s national sovereignty”.i

The amendment comes with an open threat. If, in the Senate, foreign government induces or allows a foreign agent to pursue activities forbidden by the law, then will Mexico “finish the application of bilateral treaties and prohibit foreign agents activities on national territory.”

Though not stated explicitly is the amendment widely interpreted in the context of the so-called “war on drugs”, targeting activities of the US Drug Enforcement Agency (DEA) on Mexican soil.

The President of the Senate, Monica Fernandez Balboa, confirmed that the amendment would strengthen bilateral cooperation as well as “the Mexican State by confirming its sovereignty inside the Republic face to face with other country’s agents who are pursuing their national laws exterritoriality.”

According to the law, all DEA agents must register and report all activities to Mexican authorities; meanwhile all federal or local Mexican institutions on their side must report their interactions with DEA agents to federal institutions.

US Attorney General Barr already protested against the reform, declaring it would complicate severely the cooperation in the war on drugs. The Republican Senator Ted Cruz warned, “the Mexican Government is undermining security and law enforcement relationship with the United States”, calling the attack on the DEA “unacceptable”. ii

Though Mexico’s Foreign Minister Marcelo Ebrard denied that the reform was prepared aiming at DEA agents only, the amendment still reflects a broader change in Mexico’s fight on drugs as well as its relations with the United States.

US INVOLVEMENT IN MEXICO’S NARCO-HISTORY

The words attributed to former Porfirio Diaz, Mexico’s President 1884 – 1911, sum up the situation: “Poor Mexico! So far away from God and so close to the United States.”

With an estimated illegal drug market of $150 billion in 2016 and approximately 3.5% of the population of the US consuming them, alongside Mexico being geographically at their door, the problem is clear. iii That is, as long as the US keeps consuming illegal drugs, Mexico will have a drug trafficking problem.

However, the US has hardly been passive in Mexican narco-history, and has instead often been the one organizing it. President Nixon’s declaration of “War on Drugs” soon translated into “drug traffic management”.

Alberto Sicilia Falcon’s biography is perhaps the best example of this phenomena. Falcon fled Cuba after the revolution, was trained in young years by the CIA in Miami, participated (according to Mexican police documents) in the coup d’état against Pinochet 1973 in Chile – and became the head of narco-trafficking in Mexico just two years later. He was exporting drugs worth $3.6 million per week prior to his arrest in 1976. During interrogation, he confessed to the Mexican police that he had worked for the CIA, causing the first – but not last – narcotics related crisis between the two countries.

Felix Gallardo, who formerly worked for Falcon, in the 80s became the chief of the Guadalajara Cartel, the first Mexico-wide network that accumulated wealth by transporting Colombian cocaine to the US. Several US Congressional Commissions – among them those of Walsh, Tower and Kerry, confirm that the CIA has tolerated and partly organized drug trafficking to the US to finance anticommunist warlords in Latin America.iv Gallardo himself confirmed his impunity in interrogations with CIA agents.

CARTELS AND CIA SHARE PLANES IN NICARAGUA AND GUANTANAMO

A DEA-report states that the CIA in the 80s trained Guatemalan guerillas in Veracruz, Mexico, in a ranch belonging to a drug lordv, while a plane belonging to the infamous drug lord “El Chapo” that crashed in the Peninsula of Yucatan turns out he have been used just months ago by the CIA: for the transfer of inmates to Guantanamo!vi

Mexican journalist Anabel Hernandez cites a Mexican general with the words “in the 80s the US government was itself trafficking drugs, once I had to watch US military planes transporting marijuana.”vii

In the 1980s, the DEA seemed to struggle against drug trafficking while the CIA organized it, to the point that, according to witnesses, the DEA Agent, Enrique Kiki Camarena, whose story is told by the Netflix series “Narcos: Mexico”, was killed by a CIA agent because Camarena had discovered the agency’s involvement in drug trafficking. US courts have reopened the case.viii

“WAR ON DRUGS” AND MILITARY INTERVENTIONS

The function of drug trafficking changed fundamentally in the 21st Century. The “war on drugs” has become the major justification for US interventions.

The first example took place 1989 in Panama, where de facto President Manuel Noriega, a long time US ally who has during years participated in drug trafficking, was overthrown by a US invasion justified by the “war on drugs”.

In 1999 in line with “Plan Colombia”, an agreement between Colombia and the US on foreign military aid, intelligence sharing and security cooperation was signed. “Plan Colombia” was also justified via the “war on drugs”, as Colombia is a major cocaine production location. The results on drug production and trafficking are disputed, but the US ends up gaining access to 7 different military bases in Colombia.

The situation in Mexico had meanwhile worsened. With NAFTA entering into force, Mexico abolished tariff borders towards the US, resulting in exploding industrial exports to the north, while millions of peasants became exposed to subsidized imports from the US. As corn prices fell, thousands of Mexican farmers turned to alternatives like marijuana.

The US has three arms reaching into Mexico: the DEA continues the war on drugs with often illegal methods, the ATF allows and surveys the transfer of arms to cartels. Both contribute to escalation of the war, where the State Department and NORTHCOM enter the stage with the “Merida Initiative”.

The DEA continues its operations against the heads of cartels, often applying illegal methods. DEA agents get involved in shootings, kidnap suspects, enter alliances with different cartels against others and even dress up as Mexican military officers when pursuing operations. Their strategy of targeting heads of cartels is considered to have helped proliferation of cartel organization to smaller, less accessible units all over the country.

The US Bureau of Alcohol, Tobacco, Firearms and Explosives (ATF) between 2006 and 2011 during the Operation Fast and Furious allowedthe sale of thousands of firearms and rifles from the US to Mexican cartels. Operations’ aim is to follow the road of guns to the heads of cartels. But the track of weapons gets lost, no major arrests realized and the firearms instead appear on crime scenes in both Mexico and the US. The project received criticism when US Border Patrol Agent Brian Terry was killed in 2010 with weapons sold under ATF observation.

The whole operation took place without informing the Mexican authorities.

Rising drug consumption in the US, poverty in Mexican agriculture due to NAFTA, DEA Agents’ strong involvement and the steady supply of firearms had already contributed to a tense situation in Mexico. But the “war on drugs” eventually turned into a real war, killing an estimated 150,000 people over the past ten years with the entrance of the Mexican military into the conflict.

Then President Felipe Calderon decided to send in the army, deploying 3,500 soldiers to the federal state of Michoacan in 2006. Calderon asked US President Bush for a wider cooperation, and just one year later in 2007, the “Merida Initiative” entered into force.

As the US Congressional Researchers state correctly, before the Merida Initiative, “Mexico did not receive large amounts of U.S. security assistance, partially due to Mexican sensitivity about U.S. involvement in the country’s internal affairs”.ix

But with the Merida Initiative (MI), which followed the strategies of “Plan Colombia” and is therefore called “Plan México” by critics, things changed. Within the MI, cooperation between militaries was established, including intelligence sharing, joint task forces and an immediate sales of military helicopters to Mexico worth $500 million.

The militarization of the war on drugs paved the way for a stronger influence of the US military on Mexico’s military, and Donald Trump’s threats cited in the beginning appeared in the context where the US tended to define Mexico as a “narco failed state”.

Meanwhile, Mexican experts like Carlos Perez Picart observed that the DEA had widened operations, “establishing a specific spying network in the US Embassy in Mexico and controlling communications”.x

The militarization of the war had on the hand led to some success by arrests of high level cartel leaders, on the other to a proliferation of war and an explosion of casualties.

BREAKING POINT: DETENTION OF THE MINISTER OF DEFENSE

But a fundamental change occurred with the election of leftist nationalist Andrés Manuel Lopez Obrador to the Presidency in 2018. Lopez Obrador declared the “war to be over”, and commented on Trump’s announcements 2019 to evaluate the cartels as ‘terror organizations’ with the following words: “Cooperation? Yes. Intervention? No!”xi Lopez Obrador proposed to concentrate on the economical and societal grounds that made drug trafficking flourish.

A major crisis between the US and Mexico then erupted with the detention of former Mexican Minister of Defense, Salvador Cienfuegos in Los Angeles on the 15th of October 2020 on charges of money laundering and drug trafficking. US authorities have declared to intercept telephone messages of Cienfuegos with a year of investigation.

But again, the Mexican authorities were not informed. Lopez Obrador protested the unilateral investigation and threatened to cancel bilateral treaties on security cooperation.

Cienfuegos was released and charges were dropped soon after Lopez Obrador’s threats, but Pandora’s box had already been opened.

Mexican authorities can now question and limit the DEA’s activities with the amendment to national security law, a step that calls into memory how the Venezuelan Chavez had expelled all DEA agents from his country, accusing them of espionage: a step the Bolivian President Morales took in 2008.

Moreover, the Merida Initiative, the main security cooperation framework between the US and Mexico, is being questioned heavily. Mexico’s Foreign Minister Marcelo Ebrard declared at the end of November that “the Merida Initiative is not, as presented, a bilateral treaty but a disposition of the US. We have not used any of the funds provided by the MI, not one dollar, we have not bought not one helicopter, and for us, the initiative is without effect.”

A hundred years after Porfirio Diaz and Pancho Villa, it is still impossible to change geography and move Mexico away from the US: But the Mexican government seems decided not to allow any more US boots on its ground.

National sovereignty comes first: this is the bloody lesson Mexico has learned from the war on drugs.

i For the official declaration of the Senate and a summary of the amendment, see: http://comunicacion.senado.gob.mx/index.php/informacion/boletines/49943-aprueba-senado-reforma-a-ley-de-seguridad-nacional.html (ret.19.12.2020)