Turkish mediation and the Venezuelan crisis: reasons for engagement and prospects 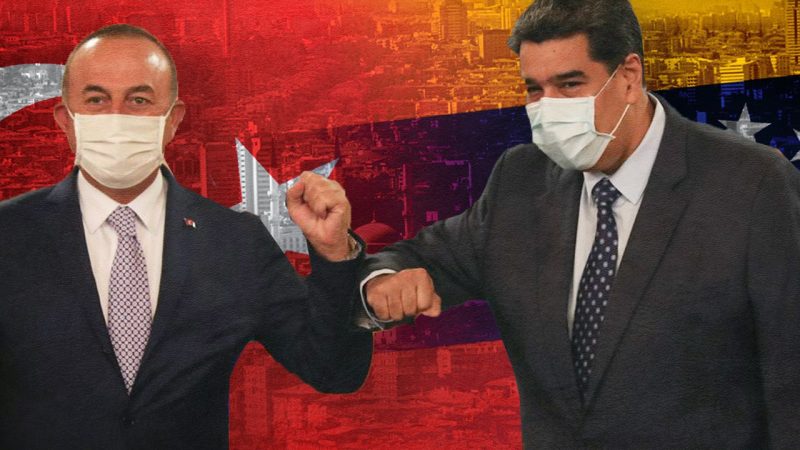 Turkish Foreign Minister Mevlüt Çavuşoğlu paid an official visit to the Venezuelan capital Caracas in August. He met with President Nicolas Maduro and signed new cooperation agreements. The visit was mainly of an economic nature.

However, on September 2, Mevlüt Çavusoğlu confirmed that Turkey had mediated negotiations between the Venezuelan authorities and the opposition.

Representatives of the Venezuelan opposition forces – Henrique Capriles, who competed with President Nicolas Maduro in the 2013 elections, and Vice Speaker of the National Assembly Stalin Gonzalez – are close to agreements with the authorities to participate in the parliamentary elections, said Turkish Foreign Minister Mevlüt Çavuşoğlu.

According to him, the presence of external observers is one of the conditions and those conditions were accepted by the Maduro administration.

In an exclusive interview with Daily Sabah, Çavusoğlu said that the Turkish mediation initiative was enthusiastically accepted by both the Venezuelan authorities and a large part of the opposition.

“Turkey is not only the friend of the current government in Venezuela but of all Venezuelans,” Çavusoğlu stressed.

At the same time, he admitted that Turkey is aware of similar initiatives of the US and the EU.

Earlier, the media reported that Capriles and Gonzalez are negotiating despite the previously agreed decision of the opposition to boycott the parliamentary elections scheduled for December 6.

At the same time, Henrique Capriles himself admitted that contacts with Turkey are taking place, but refused to give the talks the status of “negotiation”.

“There is no negotiation between Turkey and the opposition in Venezuela. What there is is talking with all those who can bring us closer to a CREDIBLE solution,” Capriles said.

In turn, Juan Guaido calls for a united opposition bloc to “avoid parliamentary fraud”.  However, Henrique Capriles calls on the self-appointed president to stop acting as if he were indeed the leader of the country, and to focus on legal political struggle, within the framework of those mechanisms that already exist in Venezuela, including elections.

The political crisis in Venezuela was exacerbated when on January 23, 2019, opposition leader Juan Guaido, whose appointment as Speaker of Parliament had been annulled by the Supreme Court two days earlier, declared himself Acting President.

He was recognized as interim head of state by the United States, joined by the Lima Group countries (except Mexico), the Organization of American States and most EU countries. Maduro called it a coup attempt and announced that he had broken off diplomatic relations with the US. Belarus, China, Cuba, Iran, Nicaragua, Russia, Syria and Turkey recognized the elections.

On August 4, the US authorities said they were “working hard” to ensure that Venezuelan President Nicolas Maduro would not be in power in the Bolivarian Republic by the end of the year. This was stated by the US Special Representative for Venezuela, Elliott Abrams, speaking at the Committee on Foreign Affairs of the Senate of the United States Congress.

According to him, the US, together with the Venezuelan opposition, are working to boycott the December elections. Now the fact that Guaido has been elected by Parliament is the only basis of its legitimacy. If the opposition loses the parliamentary elections, then Guaido will lose the last remnants of legitimacy that would allow him to claim power.

Turkey is considered a political and economic ally of Venezuela.

“No sanctions, or blockade, or any type of situation will stop us from continuing to deepen our fundamental relationship and especially our economic and commercial relationship,” Venezuelan Foreign Minister Jorge Arreaza said at a joint press conference with Mevlüt Çavuşoğlu.

On August 21, the Turkish-Venezuelan Trade Development Agreement came into force. It was concluded precisely to circumvent US sanctions against the Latin American country.

The agreement provides for the complete abolition or significant reduction of import duties and customs duties.

Thus, Turkey demonstrates that it can act in the international arena, and even more – in the backyard of the US – in the Western Hemisphere on its own, without taking into account the opinion of Washington.

Given sustained US pressure, relations with Turkey are particularly important for Venezuela. Although Russia and China are Nicolas Maduro’s main military and economic allies, Venezuela’s specific position gives other countries that dare to confront Washington unique opportunities.

The case of Iran, which in other conditions could hardly count on exporting its oil products to Venezuela, is so indicative. However, now Iranian export is an important problem for the United States.

The formation of close ties between Caracas and Ankara was facilitated by Turkey’s desire to emphasize its independence from the United States.

The cooperation is varied, from economy to healthcare. During the COVID-19 epidemic, Ankara actively assisted Caracas with the necessary medical equipment and materials, access to which is difficult for Venezuela, both because of the poor state of the budget and because of sanctions restrictions.

In 2018, the company Sardes, registered in Istanbul, was engaged in exporting gold from Venezuela. Turkish developers are tightly settled in Venezuela. In the first six months of 2020, trade turnover between Turkey and Venezuela increased threefold compared to the same period last year.

The last few years of President Recep Tayyip Erdoğan’s rule were marked by Turkey’s increased international status. It is not only about the Mediterranean and Middle East regions, but also Turkey’s penetration into Africa and active development of ties with Latin America.

In the period from 2006 to 2017, the trade turnover between Turkey and Latin America almost tripled, increasing from $3.4 billion to $9.2 billion. Latin America is a new market for Turkey with 600 million people.

A Turkish movie series production is an active demand in the Latin American market. This is also an important element of Turkish “soft power” on the continent. Nicolas Maduro himself admitted that he is a fan of Turkish series.

Turkey is an important partner of Venezuela. As a formal US ally and NATO member, Ankara is acceptable as a mediator to the opposition for formal reasons. At the same time, unlike other NATO countries, Turkey is also acceptable to the Venezuelan authorities. Ankara understands, however, that the prospects of its initiative also depend on how other countries involved in the Venezuelan crisis treat it.

The US` endless war against Venezuela

Turkey has repeatedly stated that it opposes foreign intervention to overthrow legitimately elected governments, including in Venezuela. At the same time, Ankara has always insisted that the authorities and the Venezuelan opposition engage in dialogue.

Caracas has also demonstrated that it sees Ankara as a mediator, including in relations with the United States. Last year, the post-representative of Venezuela to the UN, Samuel Moncada, stated that Caracas proposed to Washington that Turkey represent the interests of the Venezuelan government. Then, the US decided to hand over the embassy to Juan Guaido’s supporters.

Turkey is not interested in developing such ties, which indicates a changing context in international relations. There is no longer a purely regional policy in the Western Hemisphere.

The case of Venezuela demonstrates that in today’s globalized world the problems of the Middle East policy: the situation around Iran or Libya are rapidly becoming related to other global problems. This further reinforces Turkey’s interest in what is happening in what seems to be a remote area of interest to Venezuela.

The latest developments in Ankara’s mediation in the Venezuelan crisis is a testament to the growing power of Turkish diplomacy and Ankara’s increasing role in the international arena. Turkey no longer behaves like a regional power, but like a country with global ambitions. In addition, addressing regional issues in today’s world also requires global solutions.

For Turkey, this is a way to strengthen its influence in Venezuela and limit the negative steps and ties of the Venezuelan government. In addition, the role of mediator, which actually listens to the opposition, is designed to enhance the image of Turkey in Latin American countries, including those that do not support the current leadership of Venezuela.

At the same time, objectively, Ankara’s actions so far contradict the US’ position of boycotting the coming elections. Ankara is splitting the pro-American opposition.

The US may follow the path of agreements with Turkey, recognizing its initiative. This will further strengthen Ankara’s position in Venezuela and Latin America as a whole. At the same time, the Americans may try to oppose Turkey to China and Russia, creating a new point of tension in the relations between Ankara and Moscow. The price will be recognized by the US that it behaved wrongly in Venezuela, thus showing its incompetence to act in Western Hemisphere without taking into account interest of other geopolitical centers.

If the US hesitates to give up Turkey’s initiative and tries to counteract it, a new “Astana format” may be created – combining the efforts of Turkey, Russia, Iran and China against Venezuela to counter American sanctions and attempts at regime change.