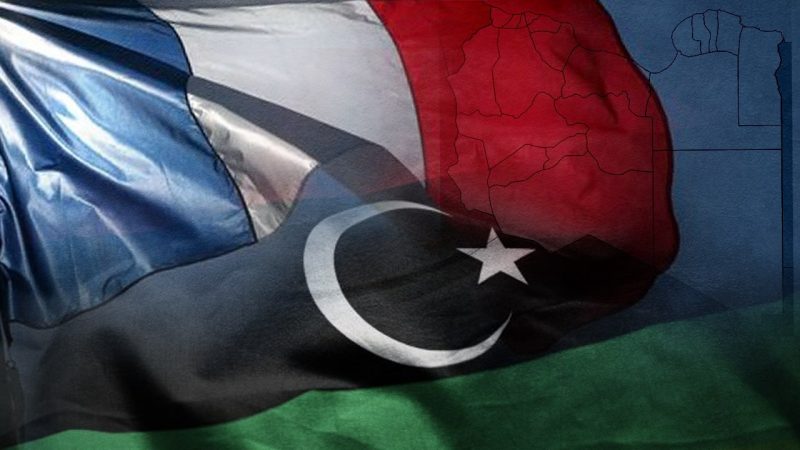 The European Union has been unable to take a position or provide a stable strategy for Libya until now. Recently, Paris kept its role in Operation Sea Guardian quiet but accused Turkey of violating an arms embargo against Libya. France claimed Turkish ships targeted a French warship in the Mediterranean, although a subsequent NATO investigation did not support the allegations that two Turkish frigates harassed the French warship, Courbet.

France has politically cooperated with the UAE in their mutual support of Haftar for years now, and continue to support Haftar militarily and diplomatically. Despite the French accusation, Ankara has defined itself as internationally a legal actor in the Libyan conflict.

We discussed the details of the Libyan crisis and current policy with Jihad Gillon, French journalist at Jeune Afrique.

Is there a unified French strategy for Libya? And what are French interests in Libya?

Jihad Gillon: The French have two types of interests in Libya. Firstly, fighting against terrorism which began around 2014-2015. General Haftar took Benghazi and the French provided some military support to him, primarily in Benghazi and Derne. Actually, some DGSE secret service personnel that were sent to help Haftar take Benghazi. In 2016, a helicopter crashed near Benghazi and some DGSE personnel were lost. The French helped Haftar retake Benghazi because the groups controlling it were considered to be Jihadis and the Islamic State. We have to remember the terrorists attacks in France in 2015, that context also explains Paris policy in Libya in that period. The second aspect is Sahel. From the French perspective, Libyan instability would fuel Jihadi groups throughout the region. We know that in Mali and Nigeria many weapons were transferred in from Libya. And, as you know, the French have heavily engaged the fight against terrorism in Mali already. In addition, there is the immigration element. All the migration routes originate from Sahel and the absence of a real state in Libya facilitates their trip to Europe. The French strategy is based on the fight against terrorism and addressing the immigration problem. So, in 2014-15, they gave some military support to Haftar that, at some point, became less military and more of a political relationship between Haftar and Macron. Macron came to Paris in 2017 and didn’t significantly change the policy of Hollande in Libya. The most significant change was a transition from military support to more ideological and political support of Haftar. The main vision of Paris is that Libya needs a strong man to provide stability to the state and the region.

What do you think about the meetings of Haftar and Sarraj organised in 2017 and 2018 in France? Did they bring any results?

Jihad Gillon: We can’t say that both meetings brought results. We see the situation now, and it’s total war. So, obviously, the meetings between Haftar and Sarraj were really the matter of a photo opportunity. Take a picture of the two so President Macron can show that he can be a peace broker in Libya and get a foreign policy success. French wanted to organize elections by the end of 2018, even if there was still fighting in Tripoli. Critics of Paris Libyan policy argue that Haftar is not a political figure, so why invite him at all with Sarraj ? The French would answer that Haftar build the most important Libyan force and that he couldn’t be ignored.

Jihad Gillon: The French government has always had an idea about Arab countries that they prefer a strong man or authoritarian to political chaos. France fears this chaos and supports the strong man to control this country. But, obviously, this analysis is wrong as we can now see. The other issue is that Macron engaged in a rhetoric war against Political Islam, which is supported by the Turkish President Erdoğan. I talked about the evolution of military cooperation to the more political and ideological approach to Haftar in Libya. I think we are right now at the peak of this approach, France siding with Egypt, and Emirates to fight political Islam in the Arab world. It’s not just a because the French sell planes to these countries – they sell some to Qatar too. Macron made a speech a few months ago in Mulhouse where there is a large Turkish community and talked about the separatist Islamic ideology in France. So really, in Macron’s mind, the fight against political Islam should be in Paris, in Tripoli, in Africa and the Arab world. So I think there is a political and ideological approach to this issue. Haftar speeches on political Islam, terrorism, and Jihadism are honey to French ears.

‘REMEMBER THE IRAQ SYNDROME OF THE US’

On 30 May 2020 AFRICOM said, in a statement, that its commander, Stephen Townsend expressed to Tunisian Defense Minister their readiness to deploy the US Security Force Assistance Brigades in Tunisia, citing concerns about Russian activities in Libya. What do you think about the perspective of the deployment of AFRICOM brigades in Tunisia and in Libya? Is it possible in the nearest future?

Jihad Gillon: Everything is possible. The French Minister of Foreign Affairs, Jean-Yves Le Drian, said we are sitting on a “Syrianisation” of the Libyan conflict now. The fact is there are many, many countries involved, both politically, militarily, and in terms of mercenaries and foreign militant groups, like in Syria. But I don’t really trust that the Americans want to engage in another military adventure in an Arabic country. This cautious policy dates back to Obama in fact. They may send some people to Tunisia but I don’t think they will intervene directly in Libya. Right now everyone is flexing muscles – the Turks, Russians, Americans, Egyptians – but I don’t think anyone really wants a major confrontation. The US had an ambiguous policy in Libya, which was mainly driven by a policy of maximum pressure against Iran, by ensuring a continuity in Libya’s oil production. They could go on encouraging Turkey, because they are worried about Russian growing footprint in the region.

‘ERDOĞAN AND PUTIN ARE THE MAIN POLITICAL FIGURES’

According to you – which are the main players now in the current Libyan conflict?

Jihad Gillon: I think there are two main political figures in Libya right now – Recep Tayyip Erdoğan and Vladimir Putin. All the negotiations and ceasefires are not discussed between Libyans, but between Russia and Turkey. Maybe, previously, Egypt and the Saudis but really not that much. Russia and Turkey, like with Syria, are the primary power brokers there. Tripoli depends on Ankara, while Benghazi depends on Moscow now. Russian mercenaries are guarding the oil fields in Sharara. GNA really can’t give up the oild fields in Syrte region, but will the Turks support an attack that would anger Moscow and risk compromising its relation with the Russians ? I don’t know about the secret negotiations between Turkey and Russia. During Haftar’s offensive against Tripoli, you saw that on the GNA side the Minister of the Interior, Fathi Ali Abd-AlSalam Bashagha, really became prominent. He wants a unified state and is against partition. Yes, he is now the main voice of Tripoli and has strong ties with Turkey. On the other side, Haftar has said he will take Tripoli in two weeks, then two months, and then a year. He is not really delivering anymore and has failed to complete his objective. The Russians are pushing for Agile Salih, the head of the House of Representatives in Benghazi. But I think he is mainly an institutional figure from the Russian perspective, not a strong man that could replace Haftar.

And what are your forecasts for the region? Do you think there will be a Turkish-Egyptian collision? Is it possible to preserve the unity of the country?

Jihad Gillon: I don’t really believe that Egypt will get into a fight with Turkey. They are two strong armies that won’t risk their image over a possible defat in Libya. Right now there is some kind of kabuki politics : everybody is shouting very loud to gain strategic leverage. But if the confrontation goes on, it will be mainly between Libyan fighters.

‘VICTORY OF THE ONE SIDE TO OVER THE OTHER SIDE’

What can ensure peace in Libya?

Jihad Gillon: Perhaps a partition could be a solution. Right now we can’t see how to achieve peace. Maybe we could see limited ceasefires like in Syria. If you observe Russia and Turkey in Syria, they didn’t reach a big deal or a global solution. They just negotiated many small ceasefires and local agreements. I think we can see the same kind of policy in Libya, perhaps even more local, but I don’t see a big political solution for Libya. The only way to fix this war is victory of one side over the other. I don’t think the main goal of Russia and Turkey is to stabilize the country with a solution, or maybe they would like to but don’t believe it is possible. Their main goal is to exclude Western countries from the crisis. They managed to do it in Syria and are trying to manage this project in Libya now. Because, right now, Western states are really irrelevant in Libya. Europeans don’t have any word to say on this topic. Their time has gone.