As France burns, Macron adds fuel to the fire 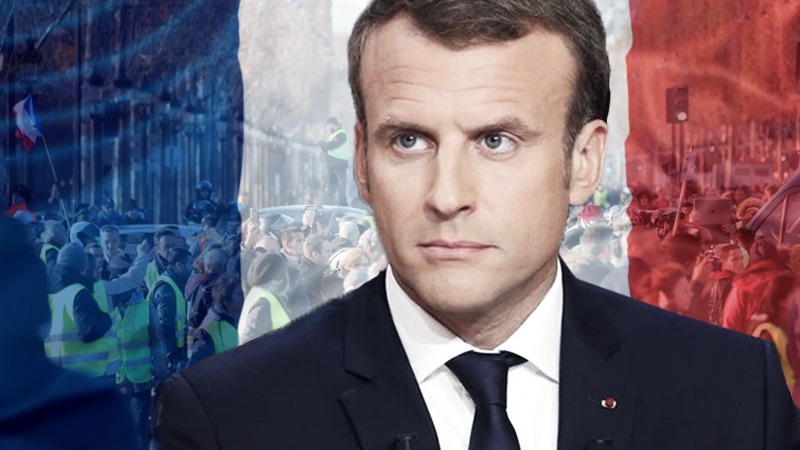 The protests taking place in cities all over France continued into a third day on Monday with blockades being set up at petrol refineries and strategic points on roads and motorways across the country.  The so-called “yellow jackets” are protesting an increase in fuel prices and, more generally, against all of Emmanuel Macron’s recent liberal reforms.

Around 409 people have been injured so far in clashes in between the yellow jackets and the authorities. One protester was killed when he was hit by a car.

In total, about 300 thousand people participated in protest actions throughout the country. In Paris, the yellow jackets even attempted to reach the presidential palace and storm the office of the Ministry of Internal Affairs. While their attempts were thwarted by police officers using tear gas, the demonstration signaled the seriousness of the opposition.

The trouble started in 2017 when diesel taxes were increased in an effort to encourage drivers to switch to more environmentally-friendly cars, but the price hikes began to bite when oil prices surged last month. The fuel tax increase has been coupled with rising prices for pay tolls, which naturally affects the entire supply line, even food.

A few before that, French officials even offered special discounts to people who bought diesel cars. This lead to a boom of diesel car purchases, particularly in tandem with the French government’s promise that prices for diesel fuel would remain low. There are about 19 million diesel cars in France (in comparison, there are 12 million cars in the country which run on traditional petrol). It should be evident why protests ignited as the diesel prices rose despite government promises. Even more heinously, the government then decided to try to phase out the machines they had just encouraged people to purchase, deciding that diesel engines are not “environmentally friendly”.

Diesel is set to go up by seven cents a liter, with petrol rising by three cents. Diesel vehicle owners, still a majority in France, feel cheated after the sudden reversal which comes at their expense.A liter of gasoline in France costs about 1.5 euro, higher than the majority of European countries.

It cannot be overemphasized that Macron is a staunch supporter of economic liberalism – he promises low taxes, but in reality, he is willing to make serious tax hikes if the middle class bears the burden.

The government is trying to explain their unpopular measures as part of a strategy to develop alternative energy sources, claiming they are doing what is “necessary for the environment”. Yet, Nicolas Hulot, a well-known ecologist and environmentalist, will be the first to demonstrate that this claim is nonsense. Hulot slammed the door as he left Macron’s government this summer, saying that despite his best efforts, no serious environmental initiatives were being carried out, and that environmental issues and slogans have essentially become window dressing for liberal economic policies.

“Apple, pay your taxes!”: economic liberalism at the center of the crisis

The current situation showcases a broader political crisis in France: these are not your traditional French protests. A more general ideology of forcing unpopular measures and costs on the people for the good of the banks has become obvious to everyone, and the image of Macron as a young technocrat is crumbling.

The demonstrators indignation is especially justified considering that the tax burden on ordinary citizens is steadily increasing while the liberal government freely finances adventurous and expensive multicultural policies. At the same time, many multinational corporations are able to avoid paying taxes altogether.

One good example is the parallel protest movement against Apple in France. The protests are organized against the opening of a large-scale Apple store in Paris, but on a deeper level they oppose a form of open aggressive capitalism lead by the arch-banker himself, Macron.

The demonstrations were organized by activists from the international alter-globalist movement Attac which was founded in France in 1998.

“We want to remind everyone that this corporation is the world leader in tax evasion”, – a representative of Attac said about the Apple company during one of the protests.

According to the demonstrators, Apple illegally hides billions of dollars abroad which should be subject to taxation. The activists claim that the Apple company sent a large sum of money to Ireland to avoid taxation, and is now transferring the funds to the company’s tax haven: the isle of Jersey.

Since January, Macron’s approval rating has dropped by half, approaching the record-low of his predecessor François Hollande.

Macron’s approval rating fell 4% last month and is now at a record-breaking low of 25%. The rating of prime minister Edouard Philippe fell by a sharp 7% as well (from 41% in October to 34% in November).

Some of the yellow jackets have already raised slogans calling for Macron to resign, while others wore pins and patches which read “give us back our purchasing power”.

In Macron’s place, another politician would likely cancel or at least curtail such unpopular measures, but the French president’s fanatical liberalism is leading him to hold his ground.

It is possible that Macron will make small concessions on fuel prices if the protests continue to put on pressure… However, this will be too little too late to fix the complete political, economic and cultural disaster facing the country. The massive number of migrants is already stretching popular social support systems to the brink of collapse (grants, health care etc.), and concessions to bankers and multinational corporations are killing small business (the number of suicides among French farmers and small businessmen is one of the highest in Europe).

It will, of course, be a powerful victory if today’s revolutionaries can force Macron out of office – but what comes next? The French political system will still be under the power of the banks (economically) and Washington (politically), and these positions are not up for election. Worst of all, France long ago abandoned the traditional ideologies which might have served as a bulwark against rampant liberalism. Despite that many people are finally waking up in France (part of them emigrating to Eastern Europe, and part making up the yellow jackets), the once proud country is already on its deathbed. People, religion and culture are what give a nation life, not fuel prices.

Whatever happens to Macron, the next president (be it transgender, a robot, or a non-Francophone migrant) will not be able to maintain control of a society that has been so deeply divided. Marine Le Pen’s «Au nom du peuple» was a final burst of energy, and likely France’s last chance, but the French people preferred the technocrat banker Macron, and are now living with the consequences.

All things considered, the problem facing France today is not actually fuel prices or even Macron: the problem is modernity itself, and, most of all, the mental and cultural disease of liberalism.