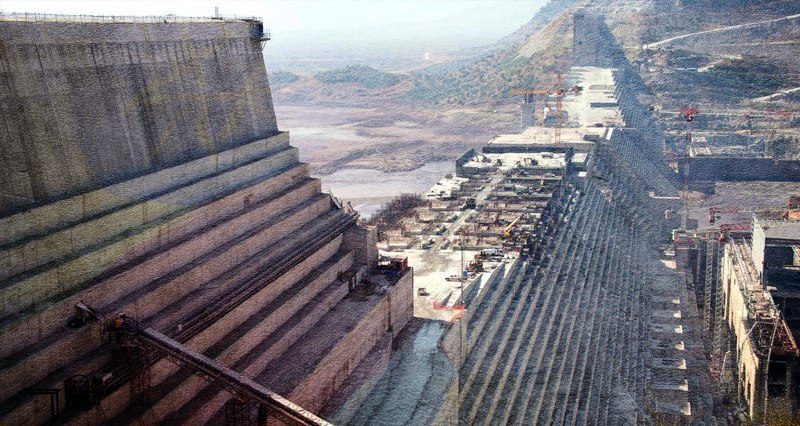 The foreign ministry of Egypt has called for “urgent clarification” from Ethiopia after conflicting stories emerged in the media that it had started filling the reservoir of Grand Ethiopian Renaissance Dam (GERD) on the Blue Nile River.

On July 15, the Facebook page of the Ethiopian Broadcasting Corporation reported that the Minister of Water Resources, Irrigation and Energy of Ethiopia Seleshi Bekele stated that Ethiopia had started filling the reservoir of its giant dam on the Blue Nile River and also confirmed the authenticity of satellite images of the dam, where the process of the filling was shown. The news gathered over a thousand enthusiastic comments and repostings from the Ethiopians.

After a while, the first 2 paragraphs of the news were changed to a neutral report that the Minister announced the continuation of the dam negotiations “with respect to Ethiopia’s interests”.

The day before the news report, the media confirmed that the negotiations on the hydroelectric power plant Grand Ethiopian Renaissance Dam (GERD) had reached an impasse.

Water war on the Nile: Can Sudan bring Egypt and Ethiopia to the negotiating table?

The reservoir water level has risen due to heavy rains, which are common in Ethiopia at this time of year, Seleshi Bekele, Ethiopia’s water minister, said. The Ethiopian minister said the reservoir is being filled “in conformity with the normal process of the construction”.

However, according to Sudanese authorities, the Blue Nile water level has dropped by 90 million cubic metres per day and the dam’s gates were shut down.

“It was evident from the flow meters the al-Deim border station with Ethiopia that there is a retreat in the water levels, amounting to 90 million cubic meters per day, confirming the gates of the Renaissance Dam,” the statement said.

In turn, the images from the European satellite Sentinel-1 confirm the water increase in the reservoir.

The Dam of special importance

Last spring, the Prime Minister of Ethiopia Abiy Ahmed promised to start filling the GERD tank in July during the rainy season.

At that time, it triggered a sharp reaction from Egypt. Once again, the Arab media began to circulate reports of a possible strike by Egyptian troops on the dam.

For Egypt, rapidly filling the reservoir is fraught with widespread drought and the loss of much of the Nile’s water resources on which the country depends. Cairo therefore seeks to delay and stretch the filling of the GERD Reservoir, if not stop it altogether.

The main subject of the conflict is the volume of water that Ethiopia needs to store in the emerging Reservoir of the GERD.

In total, 74 billion cubic meters of water is needed to fully fill the reservoir. If the process is stretched out over a decade, the decline in water flow from the main Nile will remain acceptable to Cairo. At this rate, however, Ethiopia will start producing electricity much later than 2021, although this does not require the reservoir to be filled to its maximum capacity.

For Ethiopia, this 6,000-megawatt hydropower plant is a chance to electrify the entire country, which could provide a powerful boost to economic development. Addis Ababa also hopes to sell electricity abroad.

Is war between Ethiopia and Egypt inevitable?

Ethiopia has a difficult economic and social situation. Ethnic protests have sporadically erupted, and some regions have opposed the central government. Cheap electricity, which can also be exported by sharing it with regional and ethnic elites, is essential for Addis Ababa.

The End of “Ethiopian Miracle”

Egypt realizes that for Ethiopia, to a large extent, the launch of the hydropower plant is a political issue.

Usually , the Ethiopian side notes that Egypt wrongly considers the Nile’s waters as its property, while Ethiopia is fully entitled to dispose of Blue Nile resources flowing through the country.

For his part, Ethiopian Prime Minister Abiy Ahmed said last week that Ethiopia would fill the Great Renaissance dam on the Nile by taking advantage of the rainy season. According to Ahmed, if Ethiopia refuses to fill the reservoir, it will abandon the hydropower plant.

On June 26, after another round of negotiations, it was announced that the signing of the final agreement was a matter of two or three weeks. A week later, the Chairperson of the African Union Commission, Moussa Faki Mahamat, said that over 90% of the issues in the tripartite talks between Egypt, Ethiopia and the Sudan on the Great Revival Dam on the Nile had been resolved.

However, the time frame for compromise was coming to an end and no solution had been found. Ethiopia had previously stated that if the treaty was not signed, it would fill the reservoir itself, putting the interest of the Ethiopian people first.

A glance at Egypt: Cairo’s push to take charge of negotiating Ethiopian and Libyan crises

So far, everything that has been going on around the GERD project since February 2010 is reminiscent of blackmailing the Egyptian and Sudanese sides in order to get a better offer; but there is no guarantee that the negotiations will not finally reach an impasse.

For Ethiopia, the GERD project has long been a national idea. It is supported by both the authorities and the opposition, and no major Ethiopian political force opposes it.

For the Egyptians, the Nile is also a part of the country’s national idea. Therefore, the possibility of concessions for both sides is also limited by purely psychological considerations, considerations of prestige and fear of losing public support, because in every country the population is confident in the malicious position of opponents and the exclusivity of their rights to the Nile’s waters.

Prospects for war or conflict over water resources in Africa are now high. However, Egypt’s zeal is constrained by the difficult situation in Libya. There, the forces of the Government of National Accord and Turkey are besieging Sirte and are aiming to take over Al-Jufrah Air Base. Having received them, the GNA, with the help of Turkish aviation, can ensure flight control throughout the country. The Egyptian leadership supports the Libyan National Army of General Khalifa Haftar and has long since issued an ultimatum that the capture of Sirte will lead to the invasion of Libya by the Egyptian army.

Under these circumstances, Egypt is unlikely to dare to fight simultaneously on two fronts – against Turkey in Libya and against Ethiopia. At the same time, Ethiopia and Turkey may consider each other as leverage against Egypt, which increases Ankara and Addis Ababa’s interest in one another.

The recent contact between the Foreign Minister of Turkey and Mulatu Teshome Wirtu, former President of Ethiopia and Special Representative of Abiy Ahmed, shows that both countries are more interested in each other when it comes to confronting Egypt.

Moreover, Cairo is extremely limited in its choice of means to blow up the dam, even if it decides to do so.

It is worth acknowledging that Egypt is currently in the most dangerous situation. That is largely due to the fact that the last version of the agreement, which Ethiopia rejected, was created with the support of the United States. Cairo decided to get Washington’s support, but that decision turned out to be a fatal mistake.

Will Ethiopia force Egypt to carry out the first strike of the African water wars?

The US Treasury Department has drawn up a draft agreement that was not signed in Ethiopia because it infringes on the country’s sovereign right to use the Nile’s water resources. Besides, one should not underestimate Ethiopia’s traditionally strong ties with China and the fact that the failure and sponsored by the US GERD negotiations coincided with the aggravation of the US-Chinese confrontation.

In recent years, the United States has shown complete disregard for international law and has consistently withdrawn from previously concluded treaties. This makes Washington the worst partner for any agreements, including those between Egypt and Ethiopia.

Washington’s mediation has proven to be a failure, and there is every reason to believe that Cairo, Khartoum and Addis Ababa may try to find a new basis for negotiations. They may try to resolve the issues either on their own or through other intermediaries, which may be China, Russia or European countries.

But first and foremost, in order to get their hands free in Ethiopia, Egypt should solve the issues with Turkey in Libya – either again or through the mediation of Russia as Cairo’s only ally in Libya interested in close relations with Ankara or on its own.

Proposals for such normalization have already been made public by the Mohamed Sabreen – Managing Editor of  the leading Egyptian Al-Ahram Newspaper.

Proposals for normalization in Turkish-Egypt Relations