Alliance of contradictions: Turkey has no place in NATO 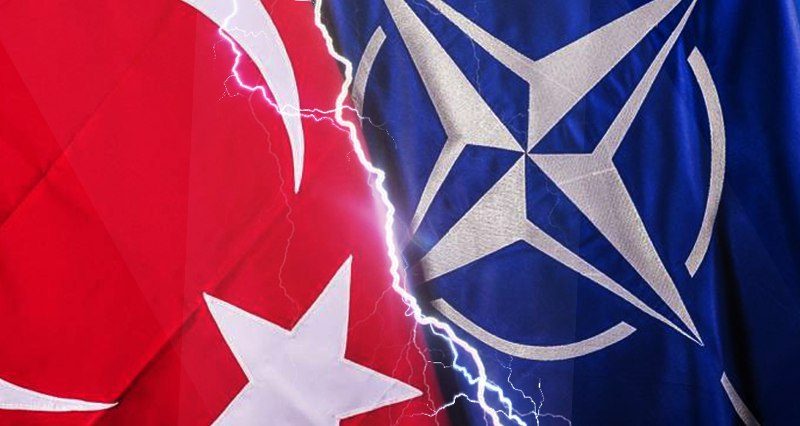 Earlier in June, a Turkish frigate off the coast of Libya refused to carry out an order to inspect the cargo from the French frigate participating in the NATO Sea Guardian operation. Avoiding the inspection, the Turkish ship targeted the French warship with the help of a missile guidance radar system, which the French military department regarded as exceptionally hostile and aggressive.

Following Macron’s statement, four people suspected of spying for Paris were arrested in Turkey. The Turkish Foreign Ministry stated that Macron suffers from “abdication of reason”.

But there is a more global, important issue in view: the value and role of NATO today. Macron’s first remark about “brain death” last year raised the debate about the need for a North Atlantic Alliance as such.

The NATO bloc today is torn apart by controversy. Turkey and France, for instance, demonstrate diametrically opposed interests. There are, however, contradictions between other member nations as well.

NATO Summit: Turkey as a litmus test for a collapsing alliance

The anniversary NATO summit in late 2019 revealed the main contradictions within the Alliance.

– Issues of defense spending (to what extent each country can afford to increase it). The US had previously insisted that spending should rise to 2% for all member nations. On June 24, Donald Trump said that even that figure was insufficient. The main tension in this direction is one between Germany and the United States.

– The definition of “enemies” and a strategic vision for the Alliance. For example, if for Turkey, the Kurdistan Worker Party (PKK) and its Syrian branch – YPG – are considered terrorists, for other countries within NATO, this is not so obvious. The bloc is required to oppose Russia/Cuba/China etc., while a number of members, including Turkey and Hungary, are inclined towards a multipolar world and cooperation with countries like Russia. Moreover, at the London summit in December 2019, China was first discussed as a special item on the agenda. It is obvious that the Chinese challenge will also be reflected in the new Strategic Concept of the alliance, work on which is expected to begin in 2020. However, most of NATO’s European countries, even such an ally as the United Kingdom, do not intend to break ties with China. Another point of tension is emerging around this axis.

– The choice of weapons. Member states, much like Turkey, are required to forcefully give up armament of “enemies” – for example, Russian S-400s, despite the profitability of the deal. The acquisition of inexpensive but high-quality Chinese arms is also in question, after NATO decided to deter China at its jubilee summit in London last December.

– Non-recognition of merits. Turkey criticizes NATO allies for not recognizing the country’s contribution and efforts on important global issues, including the fight against ISIS and the refugee crisis.

– The alliance’s failure to meet its commitments. The same Turkey has not received any support for the extradition of FETÖ fugitives, who played a key role in the attempted coup on July 15, 2016.

– And most importantly, the issue of borders of loyalty and solidarity. Participants have different goals, different interests, and NATO does not ensure either unity or achievement of these goals and interests.

All of these are systemic contradictions, summing up many partial differences between individual countries.

France, Turkey and Syria: NATO is facing a new internal crisis and a loss of influence

There are now two geopolitical poles in the North Atlantic Alliance. The first is the Atlanticists – the US and their most loyal allies: Great Britain and Eastern Europe countries (Poland, Romania, Baltic States, Croatia, Albania) – The New Europe of Donald Rumsfeld.

These are the leaders in terms of percentage of military expenditures in GDP. They see NATO’s purpose and raison d’être in deterring Russia and (if the US says so) to China, although there are difficulties in this direction, as we have already noted.

These countries insist on developing contacts with the US as a priority. But even in this case, bilateral ties are clearly more priority than the development of NATO structures as such. Thus, Poland advocates the establishment of a permanent US military base on its territory (rather than a NATO base, where a contingent from other countries could be located).

Poland will host one of the elements of the American global missile defense system Aegis Ashore, similar to what is currently in Romania. The Mihail Kogălniceanu Air Base in Romania is also primarily used by American troops.

Against this background, the countries of continental Europe, primarily France and Germany, are increasingly seeking independence from the United States.

Thus, in November 2019, the President of the European Commission, former German Defense Minister Ursula von der Leyen, followed by the head of European diplomacy Josep Borrell, stated that Europe must learn the “language of force”. On November 8, in an interview with Le Monde Borrell, Macron first noted the “brain dead state” of NATO which “reflects the need for Europe to move forward with determination in the development of its own defense capabilities, in order to be able to face the conflicts that affect it as closely as possible”. According to Borrell “Today’s United States is no longer the one that offered us its protective umbrella”.

German Chancellor Angela Merkel has repeatedly stated that Europe cannot rely solely on the protection of the United States. Therefore, Europeans must take their destiny into their own hands.

“We as Europeans have to fully take our fate into our own hands if we want to defend our community,” Merkel said in 2018.

The German Chancellor supports Macron’s initiative to create an independent European defense component, “creating a real European army”. The French President himself is actively promoting the agenda of European defense independence. Earlier he called for the creation of a European army to “protect ourselves with respect to China, Russia and even the United States”. In 2017, the EU countries agreed on a framework structure to facilitate defense cooperation within the EU.

Against this background, it is indicative that the US is crushing its military presence in Western Europe and increasing it in Eastern Europe. As US President Donald Trump said on June 24, the Americans may move some of their troops from Germany to Poland.

The split between the French-German core of Old Europe and the Eastern European Union with the US is not the only contradiction in the NATO bloc. Even the seemingly unstoppable alliance between Canada and the United States has been tested in recent years; and this is not just about the tariff war that President Trump waged against Canada, forcing it and Mexico to revise the terms of NAFTA.

The Canada-US contradiction shows another division within NATO – ideological, showing how ideology intertwines with geopolitics.

Canada is the only US ally on NATO with which Washington shares a border. Since the Cold War, both countries’ air defense and missile defense systems have been under the unified North American Air Defense Command (NORAD). The missile warning systems located in the northern ally’s territory play an important role in the US defense system.

However, after Justin Trudeau came to power in Canada in 2015 and Donald Trump in the United States in 2016, relations between the two countries are going through bad times. Leaders have diametrically opposed views on a range of social and political issues that are relevant to both countries’ societies. Trudeau is a liberal whose position on migration, abortion, the right to bear arms or respect for human rights in the world is closer to that of the Democratic Party of the United States.

Trump, on the contrary, is much more conservative on some issues than a significant part of Republicans. On the other hand, there are also geopolitical contradictions between the US and Canada in addition to ideological ones.

The US opposes Canadian claims to sovereignty over the Northwest Passage. This is the sea route from the Atlantic Ocean, through the Canadian Arctic Archipelago to the Arctic Ocean, and from there – through the Bering Strait – to the Pacific Ocean. The US, as in the situation with the Russian Northern Sea Route, considers the Canadian Northwest Passage to be international waters.

In May 2019, US Secretary of State Mike Pompeo criticized both Canada and Russia at a meeting of the Arctic Council Foreign Ministers in Helsinki. At the same time, the US Department of the Navy said that Washington is studying the dispatch of a warship to the Northwest Passage to conduct Freedom of Navigation Operation (FONOP).

The ideological factor also plays a significant role in the American-European contradictions, overlapping with geopolitical ones. As a result, on the one hand, globalist Macron opposes the conservative and nationalist Trump. On the other hand, he defends the agenda of European continentalism against American Atlanticism.

Turkey, against the backdrop of these fundamental splits within NATO, is equally alien to each of the camps. Recep Tayyip Erdogan’s leadership, which is focused on national sovereignty is a problem for all actors. As a populist and realist in foreign policy, Erdogan is closer to Trump than to liberal European politicians. On the other hand, Turkey cannot accept the role of a mere US satellite, as the Eastern European countries do, and Washington under Trump is not ready to engage in a dialogue with Ankara on equal terms.

In addition, US Congress is heavily influenced by liberal globalists, and if Joe Biden wins the 2020 presidential elections, this group will also take over the White House.

However, ideological similarities will not correct the geopolitical divergence between the US and continental Europe, which claims to be an independent force: the rift within NATO will remain. At the same time, Turkey remains outside the European defense initiatives, and the road to the EU has long been closed to it. The US is suspicious of Turkey’s increased independent role in the world. Turkey’s multipolar course and friendly relations with China, Russia and Iran are unacceptable to the United States.

From the point of view of bilateral relations, Turkey has the greatest number of contradictions with the following countries:

Although Italy is an important defense partner of Turkey, and Rome (together with Doha and Ankara) supports the same side of the conflict in Libya, there are also serious geopolitical contradictions between Italy and Turkey.

One could say that NATO has never been a monolithic bloc, but in recent years the contradictions between the countries of the alliance have only been growing. At the same time, there is no place for Turkey in the Eurocontinentalists’ struggle with Turkey’s Atlantists. Both blocs are equally hostile toward their “ally”. History itself calls into question the meaning of the Alliance, at least for Turkey.

European countries openly admit that the main reason why they yet do not break with this structure is that they cannot yet provide protection for themselves without the US. However, this is not Turkey’s case. The Turkish army and navy have long and effectively defended the country and its interests independently.

NATO exists only by historical inertia. Perhaps it is convenient for European countries and the US to keep Turkey in the same military organization to have at least some influence on it, to be able to influence the military elite of the country. However, what does Turkey get from being in the same bloc as the US, which supports FETO and PKK, France, which accuses it of “dangerous games”, or Greece, which intends to squeeze it out of the Mediterranean with the help of European friends?