The Deep State and Regime Change in the USA 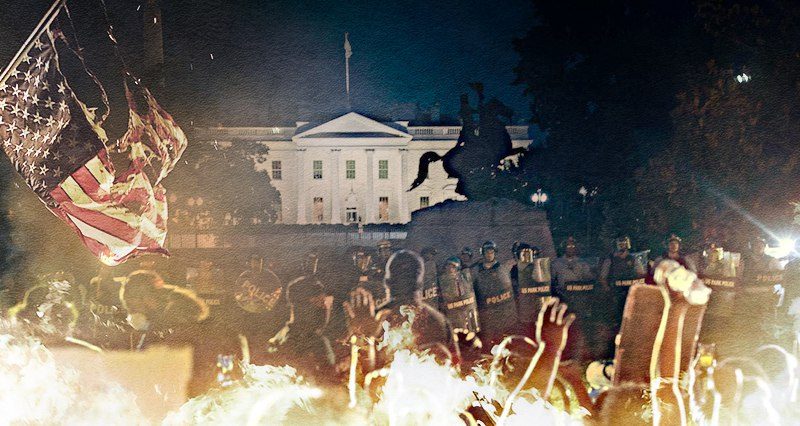 For a week now, mass protests have continued in the United States calling for racial and social justice. Parts of the National Guard have been introduced in many states and Washington, D.C. America is the largest civil standoff since the 1960s when the country was rocked by protests against racial segregation and the war in Vietnam.

Against the background of a thoroughly justified mass protest against unresolved racial and social problems in the US, another point of tension emerged within American society, more precisely, among American elites.

The military vs Trump

Authorities in individual states resisted Trump’s demand for a crackdown on the riots in the United States. On June 2, the President of the United States said that if the governors do not use the National Guard funds, the president may use the army.

“If a city or state refuses to take the actions necessary to defend the life and property of their residents, then I will deploy the United States military and quickly solve the problem for them,” Trump declared.

The next day, however, Defense Secretary Mark Esper said that doesn’t support the use of active troops to suppress protests, which directly contradicted President Trump’s statements.

“We are not in one of those situations now. I do not support invoking the Insurrection Act,” said Esper.

The Insurrection Act of 1807 allows the US president to use regular military units to suppress protests. The law was last applied by President George W. Bush to suppress riots in Los Angeles in 1992, and before that by President Lyndon Johnson during the 1967 riots in Detroit.

There have been reports of part of the military being allocated for use by Washington. On Thursday, this information was confirmed. According to the New York Times, “President Trump agreed on Thursday to begin sending home 82nd Airborne Division troops he had ordered to Washington”.

At the same time, as the publication notes, this was preceded by a dispute between Trump and Esper. Gen. Mark A. Milley, the chairman of the Joint Chiefs of Staff, who is also opposed to the plan.

The US Department of Defense’s leadership was joined by high officers in the service branches of the United States Armed Forces. They opposed the use of armed forces against the protesters, concurring with their demands and criticizing the police.

For example, Chief Master Sgt. of the Air Force Kaleth O. Wright openly supported the protesters on his Twitter.

I am a Black man who happens to be the Chief Master Sergeant of the Air Force.

I am George Floyd…I am Philando Castile, I am Michael Brown, I am Alton Sterling, I am Tamir Rice.

Former Chairman of the Committee of Chiefs of Staff Mike Mullen and former Minister of Defense James Mattis both voiced opposition to the President.

James Mattis called Trump a threat to the Constitution and supported the protests in the United States. His statement was more like an appeal from a revolutionary calling for a coup d’etat.

“We can unite without him, drawing on the strengths inherent in our civil society. This will not be easy, as the past few days have shown, but we owe it to our fellow; to past generations that bled to defend our promise; and to our children,” Mattis said.

Mike Mullen, a proponent of increased US presence in Afghanistan, said he “cannot remain silent” as Trump ordered protesters to be pushed from Lafayette Square in Washington.

The military questioned the adequacy of the president’s actions, saying he was not convinced that the conditions on our streets, as bad as they are, had reached a level that justifies “a heavy reliance on military troops”.

They were joined by another authoritative former military members such as Martin Dempsey – a former Chairman of the Joint Chiefs of Staff, and John R. Allen, the president of the Brookings Institution, a retired United States Marine Corps four-star general, and former commander of the NATO International Security Assistance Force and US Forces – Afghanistan. Tony Thomas, former commander of the US Special Operations Command, hinted at the idea that President Trump’s rhetoric being consistent with the Civil War.

The “battle space” of America??? Not what America needs to hear…ever, unless we are invaded by an adversary or experience a constitutional failure…ie a Civil War…

Essentially, the military is pretending to be against President Trump using the army for political purposes. However, they themselves make political statements and take the side of his opponents: both Democrats, who were happy to accept the statements of generals, and opposition to Trump in Republican camp such as Sen. Lisa Murkowski, R-Alaska.

President Trump himself found nothing better to do than tweet at James Mattis: but the problem goes far beyond Trump and Mattis’ personal relationship.

The way the current military and their retired colleagues confront Trump indicates a significant change in the relationship between civilians and the military in the United States. Traditionally, the military sphere in the United States has been considered remote from politics: now that attitude is changing. The change started when some former military from the Obama era started to criticize Trump in 2016 – however, today, even former allies are joining in the attack, with the tacit support of their on duty colleagues.

What we are witnessing could be described as a rebellion of the “deep state” against Trump.

As the military was openly expressing its unwillingness to suppress the protests, other elements of the US federal state system also spoke out against Trump. Democrat governors continued their war, which had already begun during the struggle against the coronavirus. At that time they attacked the federal center for lack of assistance and formed their own regional associations as a counterbalance to Washington.

Now, Democrat governors are refusing to impose the harsh measures. New York City has become one of the hot spots of protest. The curfew imposed in New York City is not respected by anyone… At the same time, Democratic Governor Andrew Cuomo is refusing to introduce the National Guard to restore order.

“New York was lost to the looters, thugs, Radical Left, and all other forms of Lowlife & Scum. The Governor refuses to accept my offer of a dominating National Guard. NYC was ripped to pieces,” tweeted Trump.

The position of democrat governors can be seen as a continuation of the struggle between the two parties. The presidential elections are at stake, and the Democrats believe that Joe Biden must be elected by any and all means.

For this purpose, it is necessary to denigrate the current president as much as possible: to make him an opponent of ordinary people and especially racial minorities by mobilizing them in the elections. In order to bring down Trump, society must remain electrified on the eve of the election.

The protests came at an opportune time, which is why the Democrats are indulging them. In fact, they are essentially implementing tactics similar to the “color revolutions” the American elites have imposed on many other countries: Yugoslavia, Georgia, Ukraine, the Middle East . In Ukraine and the Middle East, all of which ended in civil war.

For the success of such a revolution, it is important that, along with mass protests aimed at regime change, there is a partial betrayal of leaders by intelligence services, the army and law enforcement agencies.

US intelligence agencies have shown which side they are on since the start of surveillance of Trump headquarters in 2016 and the publication of inaccurate reports regarding “Russian meddling” in Trump’s favor. Law enforcement agencies are in the hands of mayors and state governors, and now the army has made it clear that they will not support Trump in the event of an emergency.

Antifa is at the service of the establishment

At the same time, despite Trump’s statements that the radical movement “Antifa” will be declared terrorists, these terrorists are closely linked to the democratic establishment.

“We have evidence that Antifa and other similar extremist groups, as well as actors of a variety of different political persuasions, have been involved in instigating and participating in the violent activity”,  recently declared US Attorney General William Barr.

The current protests started in Minnesota, and it is no coincidence that the deputy chairman of the National Committee of the Democratic Party Keith Allison, and now Attorney General of Minnesota, have always patronized Antifa.

On May 31, 2020, the son of the attorney general of Minnesota announced his support for Antifa after President Trump had announced that his administration would declare it a “terrorist organization”.

I hereby declare, officially, my support for ANTIFA

Unless someone can prove to me ANTIFA is behind the burning of black and immigrant owned businesses in my ward, I’ll keep focusing on stopping the white power terrorist THE ARE ACTUALLY ATTACKING US! https://t.co/m6jxtDYmTi

In St. Louis, all rioters caught by police were released by St. Louis Circuit Attorney Kim Gardner. Her campaign in 2016 was paid for by the Soros foundation.

In a stunning development, our office has learned that every single one of the St. Louis looters and rioters arrested were released back onto the streets by local prosecutor Kim Gardner. pic.twitter.com/tMZVAyHssw

“The ‘anti-racist’ movement Black Lives Matter, which is mostly engaged in organizing mass protests, received $33 million from George Soros through the Open Society Foundation and the Center for American Progress, headed by John Podesta, in 2016. Another $100 million was provided by the Ford Foundation and Borealis Philanthropy, which created the Black-led Movement Fund for this purpose.

What is happening in the US is essentially a coup d’état akin to a “color revolution”. Although Trump’s resignation is not directly being sought, instead they are pushing for him to fail to be re-elected. Will this finally be the tipping point which pushes American’s who want change to create an independent political entity?